I'm throwing out old magazines from 2014, but two of them contained cool articles about games that Cahill and Luiz felt important to them in their development as footballers. Remember it's from 2 years ago so there's probably others the'd include now--

Exclusive interview for The Telegraph: The Chelsea manager talks religion, 'fearing nothing' and Machiavelli. Plus, he finally reveals the one thing he and title rival Arsene Wenger actually agree on.

"I think,” the Chelsea manager José Mourinho says, “I have a problem, which is I’m getting better at everything related to my job since I started. There has been evolution in many different areas – the way I read the game; the way I prepare the game; the way I train; the methodology … I feel better and better. But there is one point where I cannot change: when I face the media, I am never a hypocrite.”

Statistically speaking, Mourinho is the most successful club manager in world football. He has won the league titles in each of the four countries where he has managed – his native Portugal, Italy, Spain and England. He has won the Champions League twice. But that, of course, is only the half of it. Mourinho is – arguably – also the most divisive manager in football. There is no manager more likely to ignite the ire of rival fans. The jousting with referees and the FA, the press-conference wind-ups, the touchline sulks – never mind the football, watching Mourinho is almost a spectator sport in itself.

I go back and forth with Mou (especially this season when he's whining so much), but this interview is one of those that make me love him. :) 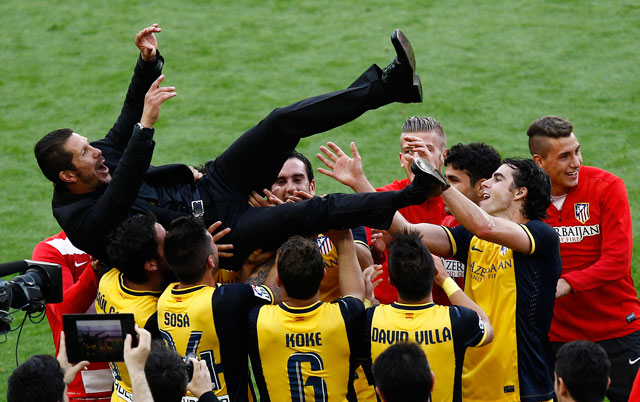 Real Madrid dominated the awards at the 2014 Fifa Ballon d’Or ceremony on Monday to cement their status as the best team in club football. Cristiano Ronaldo roared his way to yet another Ballon d’Or in the main category – becoming only the fourth player in history to win the prize three times. James Rodriguez scooped the Fifa Puskas Award for best goal of 2014, Carlo Ancelotti took silver in the Fifa World Coach of the Year, while four Madrid players were selected in the FIFPro World XI (including Manchester United’s Angel Di Maria). A further three Madridistas made the FIFPro reserve XI.

Despite clinching a stunning Liga title win on a limited budget, Real’s city rivals Atletico - who they welcome to Santiago Bernabeu on Thursday in the Copa del Rey - enjoyed next to no recognition in Zurich.

Only two Atletico-related players, Diego Costa and Thibaut Courtois, were chosen on the Ballon d’Or’s original 23-man shortlist, both of whom went to Chelsea in the summer. The striker received just 1.02 per cent of the vote and finished in 11th position. The goalkeeper earned only 0.51% and was down in 20th place.

Diego Godin, Miranda and Filipe Luis were all ignored when Fifa and France Football drew up their long list, despite forming the best club defence in Europe last season. The omission of Godin, in particular, is inexplicable after he eliminated Italy at the World Cup, scored the goal that won La Liga, and also struck in the Champions League final. Midfield masters Arda Turan and Koke were also overlooked.

All of these above players were also snubbed for the Fifa FIFPro World XI, with only Courtois making the reserve selection. The FIFPro XI is one of the most democratic awards in football - voted for globally by over 23,000 professional footballers. Contrary to public opinion, it is not influenced by Fifa or politics at all and there is no shortlist to steer players. Yet Godin and Miranda were shunned, while David Luiz - part of the Brazil team humiliated by Germany at the World Cup - made the cut.

The Atletico defensive pair's omission for Luiz was a point of ridicule shared both by fans and pundits. Arda and Koke must be raising the same question about the inclusion of an ageing Andres Iniesta. Could it be that Atletico’s cynical style of play wins them few friends in the football fraternity? Or simply that many in football vote on reputation, not achievement?

It's been a terrible couple of days and we need something to make us laugh. David Squires, the Guardian's resident cartoonist, came up with a small cartoon at the expense of The Special One and the Blues Boys.

In other Chelsea-related news:

The Blues eye a free move for Manchester City defender Micah Richards (currently on loan at Fiorentina) in summer.

Mark Schwarzer, the No.3 GK, has moved on a free transfer to Leicester.

The club is working with Herzog & de Meuron, the Swiss architectural firm who designed the Beijing Bird's Nest and the Allianz Arena in Munich, to revamp Stamford Bridge (because no one is allowing them to build a new stadium in their interested sites).


I'll try to do a roundup of all the transfer rumors as well.
Danish national football team and Manchester United goalkeeper Anders Lindegaard requests an end to homophobia in football and hopes for a brave gay hero as a role model. He also talks out against islamophobia and praises the campaign of the dutch football union.

Maybe someone speaking danish can translate the whole article of Anders??

manics just did all the work. you can also read this in her comment...

The former Portuguese international joins the Ewood Park club on a free transfer following his release from Braga at the end of last season, signing a two-year-deal.

So very happy that Nuno gets to continue playing. I have loved him forever. My favorite currently playing footballer and only 2nd to Eusebio for favorite of all time.

If you want to know more about him, check my blog post out I wrote last year when he was released from Benfica.

oh, and he's a fine, fine human being.

I will forever until my dying day stan this man. I'm also 99% sure almost 50% of my kit collection feature his name and number. Woops.

Source: Wall Street Journal "It's OK to Root for Germany"

A version of this article appeared June 25, 2012, on page B8 in the U.S. edition of The Wall Street Journal, with the headline: A New Take on Germany.

Somewhere between Gdansk and Warsaw

A very strange thing happened the past two weeks as I traipsed through Poland covering the Euro 2012 soccer tournament.

There I was oohing over the latest Mario Gomez goal for Germany, salivating over the way Mesut Özil quarterbacks the German attack from the middle of the field with grace and calm, and screaming "SCHWEINSTEIGER" inside my head (there is no better name in sports right now) each time the steely midfielder plants for one of his lightning strikes at the goal.
And don't get me started on the Germans' dashing, Zen master coach Joachim Löw—the George Clooney of international soccer, only better looking, and seemingly more humble and philosophical.

To understand just how weird a development this is, understand that for Jewish-Americans of a certain age (I'm 42), rooting for Germany isn't how our fathers, grandfathers and Hebrew School teachers raised us.
( Collapse )

When a team goes through a goal drought, most fans have a simple answer: a few abusive chants from the terraces, followed by a moan in the pub after the game.

But fans of German regional side FC Magdeburg decided to take a more constructive and creative approach - one that has now made them globally famous.

Reasoning that their men had gone without a goal for five matches simply from having forgotten where the goal was, they decided to take giant dayglo arrows to the match to point their heroes in the right direction.