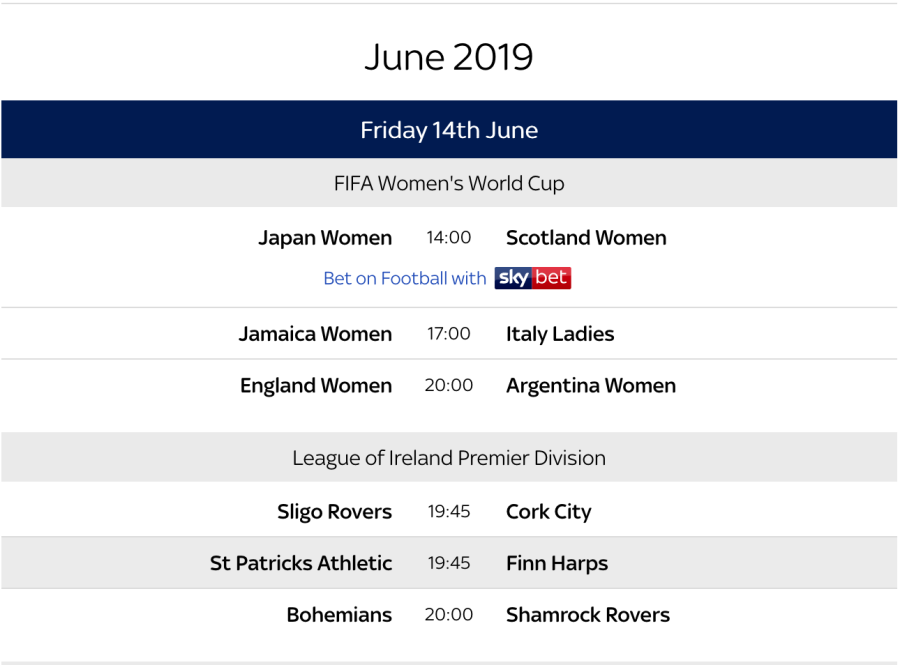 Here's what you need to know for Match Day 7!

🇫🇷 Valerie Gauvin candidly admits she deserved to be left out of France’s starting XI for their #FIFAWWC opener due to disciplinary reasons & discusses returning in style against Norway.#DareToShine@GauvinValerie | @equipedefrance

'Cookie' has been ensuring the Reggae Girlz have all the home comforts they need 😋@jff_football | #FIFAWWC pic.twitter.com/s3vfydFzq2

That's the first goal of the 2019 #FIFAWWC for #CHN! #RSACHN | #FIFAWWC pic.twitter.com/RSY0ApXTH1

Thanks so much, Lloyd. Your words that you told me make me strong. Keep going for this tournament and so on.firstly, I felt dispointment in worst situation but this is the biggest experience in mylife.☺️☺️☺️🇹🇭❤️🇺🇸 pic.twitter.com/BdFxbc0GgW

#Juventus-#Chelsea, agreement in principle for Sarri: last details to be addressed https://t.co/GkEH4XJmJ4

And as widely expected, Frank Lampard will replace Sarri at Chelsea

🚨 Allegri announces that it takes a sabbatical year: "I will stop for a year. I need to take control of my private life. "

50,000 showed up at the Bernabéu for Eden Hazard's presentation at Real Madrid - the 6th biggest crowd for such an event https://t.co/nbd9dunMRE … pic.twitter.com/g6Dp8uDQi5

It's not a Champions League Final.
It's no a World Cup Final.
It's Eden Hazard's presentation. 😱😱😱#WelcomeHazardpic.twitter.com/Ba7kDQxnqu

💈Eden Hazard getting his hair-cut for his big presentation at the Bernabéu tomorrow 😂 #HalaMadrid pic.twitter.com/V61I1w8ttK

Definitely lived in London and hung around roadman for a bit. Look at that sharp line!

Eden Hazard asking his brother to smile during his presentation 😂😂😂 pic.twitter.com/pPZq8VNWqG

A plea for the mod: hello, can you drop the socceroos tag and just put nt: austrailia instead? Because the women footballers are called 'matildas' Thanks for your time.

OP: Done. How the hell was your week. Grab a stiff drink and let's TAWK.

It's been raining cats and dogs over here, and Boris Johnson is set to be the next PM. Just break up the union now, and save us the trouble, tbh. Give the North devolution powers now.