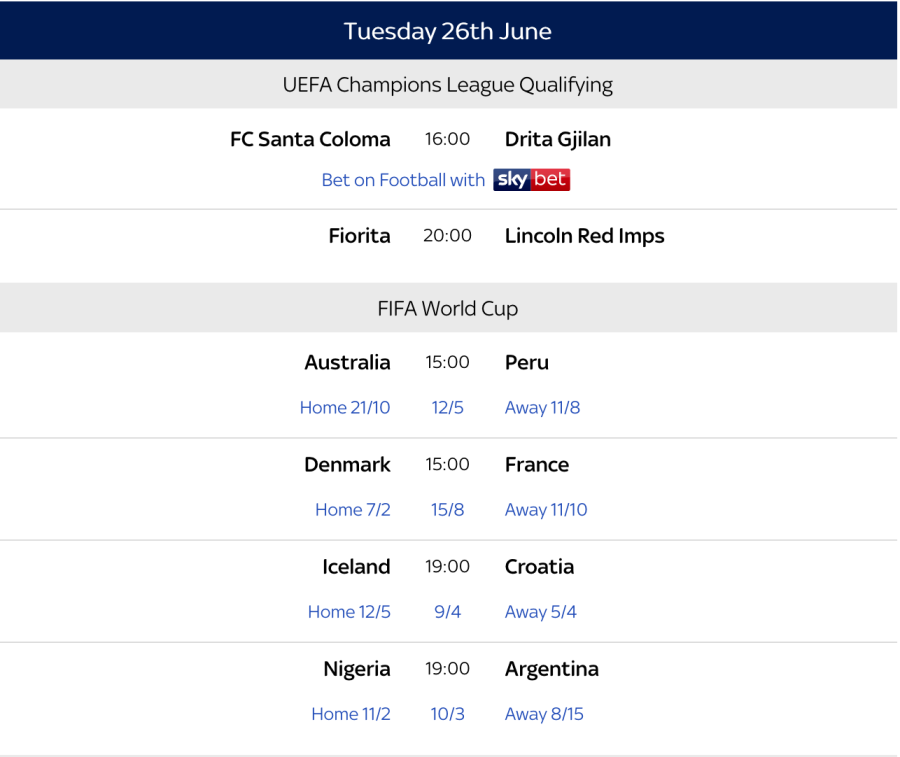 “The whole team is frustrated, not just Leo Messi. We can’t put all this on Leo”@Mascherano ahead of #NGAARG pic.twitter.com/9yyJ766arz

A day of drama and records at the #WorldCup, with two memorable goals from @07RQuaresma and @LuisSuarez9.

Here's our recap of all the day's action:
👉 https://t.co/Juzs9afbNe pic.twitter.com/ekFUMTlLLu


Group B as it stands

GROUP B Ladies and Gentlemen.
Not sure about you....but we're off for a lie down. 🥵#WorldCup #ESPMAR #IRNPOR pic.twitter.com/KiKTGlojZu

Iran’s goalkeeper Alireza Beiranvand ran away from home, grew up homeless, and slept outside his local team's football stadium. People gave him change because they thought he was a beggar. Tonight he's just saved a penalty against Cristiano Ronaldo in the World Cup.

Now this is a movie!

#DidYouKnow 🇫🇷
In French, fringe players are known as 'coiffeurs' because their ultimate aim is to coiffer (‘take’) the place of 1st-choice players. Enjoy a feature on #FRA ahead of #DENFRA

Let's have a community discussion about it...

How VAR completely changed Group B for Portugal and Spain in 120 very controversial secondshttps://t.co/bUW84QDtNC pic.twitter.com/WfD9afsEAK

"It all got a little weird."

VAR had its most controversial night at the World Cup yesterday.

¡Buenos días! And thank heavens for VAR! Technology saves the day for Spain who make it through to the Last 16 at #WorldCup Russia. Today's front cover of AS. pic.twitter.com/j8P0HVANTz

For those who came late, a few articles to illuminate

What he said #var @FIFAWorldCup pic.twitter.com/hlwuzUW8QN

Someone isn't impressed by VAR

Anyone other than Ronaldo would’ve walked for violent conduct but FIFA’s VAR turns a blind eye.

Well that’s the closest I’ve been to swearing on live TV! What I really wanted to say is that VAR is complete and utter bollocks!!🤣🤣 #IranPortugal #VAR #RussiaWorldCup2018

People need to say what's on their mind!

BREAKING: @SaudiFF decisions:
1- All professional Saudi players shall be taxed 50% of their annual income from existing contracts. Amount to be paid to respective clubs which are required to use it for development purposes.

Following their exit from the World Cup, Saudi Arabia have made widescale changes

OP: Done. Cheers, jeers and the rest of it, you know the drill.