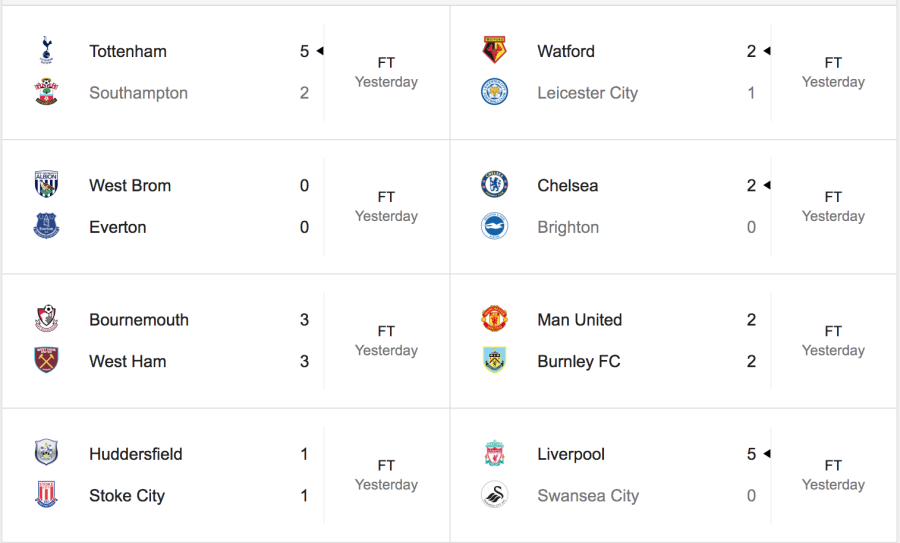 The state of play in the #PL with much more to come... pic.twitter.com/IoQ9HW12Kr


News in tweets
So Harry Kane broke a few records. Here are some reactions:

It was only a matter of time. Congrats on a massive achievement @HKane! 👏🏻🙌🏻 #COYS pic.twitter.com/RhLJaIFdcV

He's had a year

Harry Kane has 37 Premier League goals in a calendar year. Swansea have 35.

Not even sure that Man United fans will fall for this latest Mourinho shtick. The richest club in the world aren't ever going to be the underdogs you want them to be, Jose

Mou: "Manchester City are buying full-backs for the price of strikers! The price for big clubs are different to the price for other clubs. The boys are doing what they can, they are doing fine. 8 pts from 15? Last 2 matches we had 15 chances and conceded 3 s*** goals." #MUFC

If Man United are finding this footballing environment difficult..

Jesse Lingard has been directly involved in 10 Premier League goals this season:

Watford have had 13 different goalscorers in the Premier League this season - more than any other team #MOTD #Watfordfc pic.twitter.com/pAexjEppUw

OP: Done! Will be away from the PC today. Any problems, flag me?