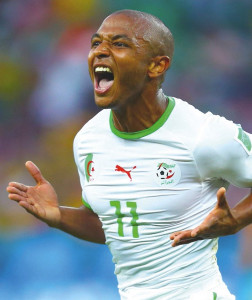 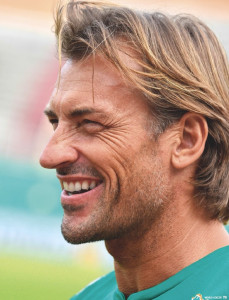 Despite having just 14 caps for his country, all the signs are that left-winger or second striker Yacine Brahimi will one day be mentioned in the same breath as such icons as Rachid Mekhloufi, Mustapha Zitouni, Lakhdar Belloumi and Rabah Madjer.

Hugely impressive as Algeria reached the knock-out stage of Brazil 2014 – the furthest they have ever gone in the World Cup – and equally electrifying since joining Porto last summer from Spanish outfit Granada, Brahimi was recently voted African Player of the Year in a BBC poll. And on the evidence of the past 12 months, there should be many more honours to come, with January’s African Nations Cup an ideal opportunity in which to make his mark.

“This trophy is going to give me more strength, more desire to work, to get better and to learn, so that I can keep having great performances”
Brahimi on his BBC award as African Player of the Year
Born in Paris 24 years ago to Algerian parents, he went to the Clairefontaine school of soccer excellence and was capped by France at youth and under-21 level, but in the spring of 2013 opted to take a different international tack, renouncing “Les Bleus” for a future in the green and white of Algeria.

Full credit to the Algerian federation for the persistence they showed in courting him, with three years’ worth of persuasion, charm and appeals to sentiment eventually paying off. “In the end, I followed my heart,” explains Brahimi. “I’m proud and happy to play for Algeria.

“It took a while because I just wasn’t ready. I wasn’t an established player. While at Rennes I was held back by a string of injuries and only on signing for Granada did I begin to start regularly. I was in a better place and could join the Algerian squad without any worries.”

Rennes must regret their inability to get the best out of young Brahimi. During his two seasons, he started only sporadically and the word was that coach Frederic Antonetti found him too lightweight, too injury prone and too unpredictable.

Granada, who initially brought the Algerian in on a 12-month loan deal in the summer of 2012, would prove to be much more to his liking. Free to express himself, his ball skills, elusiveness and creativity were exactly what the Liga doctor ordered. He ended the season as the most effective dribbler in the Spanish top flight, even outstripping the likes of Cristiano Ronaldo and Leo Messi, and was rewarded with a permanent contract.

Exceptional in tight spots and able to take on and beat any number of opponents, he has always been technically good. But what he has added to his game of late is greater clarity and composure in the box. Rather than snatching at chances, he now looks much more in control of the situation – and this certainly was the case in September when he scored a hat-trick for Porto in their Champions League victory over BATE.

“I think I’m more determined these days to seal the deal,” says Brahimi, who is rumoured to be on the shopping list of Paris Saint Germain, the club he played for as a boy. “In the past I have not been cool enough. On the training ground, I’ve been working hard on my finishing. I’m always looking to be more efficient for the team.”

“Qualification was difficult, but the most important thing was to be on the starting line with the other 15 teams for the Nations Cup”

The 46-year-old, who won the tournament with Zambia in 2012, takes a strong Ivory Coast to the 2015 African Nations Cup

You took over as coach of Ivory Coast in July 2014. It’s one of the glamorous posts in African football but it can’t be an easy job...
It’s not an easy job but I was surprised by the atmosphere with the players. Sometimes you think they are completely different because they are big stars but it was OK. We had a difficult qualifying campaign for the African Nations Cup, but now in Africa it’s difficult everywhere. They were doing well in terms of spirit and at least in the end we got the qualification, which was the most important.

Why was the qualifying campaign so patchy? Is there still a hangover from the disappointing exit at the World Cup?
Yes, I think so. The games in September were very, very difficult. First of all, most of the players were not playing at their clubs because they came late [after the World Cup] and because many play at big clubs where the squads are bigger so it is difficult for them to get regular game time. Plus, Didier Drogba stopped; [Didier] Zokora stopped; Kolo Toure did not play a single minute with Liverpool; Serey Die the same; [Cheikh] Tiote was not playing with Newcastle; [Arthur] Boka not playing with Malaga; [Serge] Aurier having only a few games with Paris Saint-Germain; Copa [goalkeeper Boubacar Barry] not playing for Lokeren. Wow! The games in September [a narrow home win over Sierra Leone and then a 4-1 loss to Cameroon] were very difficult, especially in Cameroon. But we just said we had to stay focused and make sure we secure this qualification. Qualification was difficult but the most important thing was to be on the starting line with the other 15 teams for the Nations Cup.

What is the secret to winning the African Nations Cup?
I think it’s the build-up. There was a lot of comment at the time about Zambia only getting among the top teams because of luck, but I always remind people that we started in 2008. One year later we finished third at CHAN [the African Nations Championship, a tournament for national teams made up of home-based players only]. People might not be all that interested in CHAN but it was the first step. In 2010 we reached the quarter-finals at the Nations Cup in Angola. We only lost to Nigeria on penalties after a 0-0 draw and I think we were better than Nigeria on the day, who were down to 10 men. We had some chances but didn’t score, but we were almost in the semi-finals. [Nigeria goalkeeper Vincent] Enyeama was fantastic; he stopped two penalties in the shoot-out. So when we went to the 2012 finals, in our minds, we believed we had a chance. We were the first country to arrive in Equatorial Guinea and we were determined we were going to go to the other co-hosts Gabon to play in the Final. Of course, we also had the motivation of the memory of what had happened there in 1993, when the Zambian airplane crashed in Libreville and the whole team was killed. We felt we had missed out on something big in 2010 when we became the first Zambian side to reach the quarter-finals in 14 years. That was a good result at the time, but for us – the coaching staff and the players – it was not enough because we thought we deserved better in 2010. The spirit was the same but with a big determination to do better. We believed in ourselves when we went over there; we went with a fantastic team spirit.

The Ivorians obviously want you to do for them what you did for Zambia and win the African Nations Cup, but you’ve only been in the job for less than six months. There must be a heavy burden of expectation on you…
Yes, of course you need time to achieve anything. But in the space of a month you do have an opportunity to try and work on getting the right combination of fantastic team spirit, skill and everything...and you can do something. Like Stephen Keshi did with Nigeria. He first found some players in the local league and in a few months he was able to put together a very strong team and they won the 2013 African [Nations] Cup. He did a fantastic job, so maybe we can do the same but there are a lot of teams who want to win the cup, of course.

Speaking of that, who do you think will do well?
In our qualifying group, Cameroon and the Democratic Republic of Congo were very tough. Cameroon have made a very good transition after the World Cup. Beware of them. I was impressed by the matches that South Africa played in the qualifiers. I didn’t think many others would take them too seriously but they are ready, they are working, they are fast, they are young. I think it’s a very good combination. Algeria had a very good World Cup and even after changing the coach, it seems they are on the same track. Of course, there are also a lot of very good teams and it is very difficult to say before the competition. What I know, is it will be a very tough tournament.

What do you think of the decision to move the tournament from Morocco to Equatorial Guinea?
Morocco was going to be one of the best Nations Cup tournaments ever because they have everything. Wonderful stadiums and facilities, great hotels. We played in Equatorial Guinea in 2012 and there were hardly any people in the stadium. If they want this next tournament to be successful they must ensure they have better support.


Source: both articles came from the January edition of World Soccer Magazine