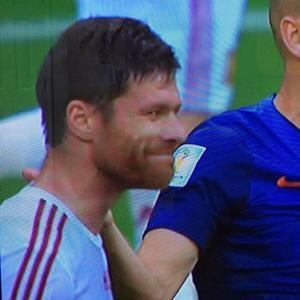 Quote not by Xabi Alonso

Former captain Rio Ferdinand accepts a "naive" England did not deserve to stay in the World Cup, but is confident the young squad will grow stronger from the disappointment of Brazil 2014.

England's early exit was confirmed after Costa Rica beat Italy, leaving the Three Lions bottom of Group D and out of the tournament with a match still to play. It is the first time in 56 years England have fallen at this stage, with the average age of that World Cup squad the only one younger than the current crop.

However, Ferdinand - part of Sven-Goran Eriksson's squad which twice reached the last eight in 2002 and 2006 - sees no reason why next time cannot be different as Roy Hodgson must regroup England for the 2016 European Championship.

"The World Cup for me would have been a better place with England in it, but you have to earn the right to stay in a tournament. Unfortunately for us, we have not done that," Ferdinand said on BBC One. "Maybe we were a bit naive in situations, in the game yesterday when we got back into it at 1-1, we had a chance to get a point and dust ourselves down, to say 'right, we are ready for the last game when everything is going to be on it,' but we did not give ourselves the opportunity. It was there for us and we just could not see it through."

But the former Manchester United defender - who was last year named on the Football Association's commission set up to improve the national team's fortunes, along with Hodgson - remains positive for the future.

He said: "The England players can take the experience, when I went to the 1998 World Cup, I did not play, some of these guys have played and will do again against Costa Rica hopefully, and they can take that into the next tournament.

"It is valuable, not just playing the minutes, it is being around the hotel, how you prepare yourself, what it means to go to a World Cup, feeling that pressure here, so hopefully they can suck all that in and take it into the next tournament."

"That is what you have to look for from these young guys. You have a lot of young players in this squad, talented players who are doing well for their clubs and we have to find a way of getting that into our England team with an England shirt (on), and that is the job of the manager."