Hired as the U.S. men's team head coach less than a week ago, Jurgen Klinsmann is expected to name his roster for the Aug. 10 friendly against Mexico shortly.


Although it was initially believed the announcement was set for Wednesday, U.S. Soccer officials told Goal.com that it could be pushed back to Thursday.


Klinsmann replaced Bob Bradley as the team's boss last Friday and contacted five or six players over the weekend. He was expected to reach out to the rest of the players after Monday's introductory press conference in New York City.

"I pretty much have a picture of where they are at right now with their club teams, especially if you look at the overseas players, their personal situations, some without a club right now," Klinsmann said. "It’s not going to be easy to form a highly competitive team, but we will get it off the ground."

Don't expect Clint Dempsey to be in Philadelphia when the U.S. team takes on El Tri as his Fulham squad prepares for the start of the Premier League season. And some of the other players currently in European leagues may not make the trip, especially those who recently joined new club teams, including AZ newcomer Jozy Altidore.


But with a new coach, there could be some surprise additions to the squad. Klinsmann may want to make a statement by bringing in players Bradley chose to ignore over the past couple of years. The former Germany coach may also want to bring in a good mix of MLS players and young European-based players who may be available, such as midfielder Mikkel Diskerud.

"When you come into a situation like this, you analyze every individual player, the team itself and the program, which I’ll have the chance to do during the next couple of weeks, to see how I can develop them further," Klinsmann said.
Klinsmann is also expected to name his first of many coaching staffs this week before he ultimately decides who will be alongside him during the 2014 World Cup. He plans on looking at the highly qualified coaches in the United States and is expected to bring in MLS coaches as special assistants for the Mexico friendly.
"It won’t be a coaching staff that will be confirmed for the next three years. We will take our time," Klinsmann said. "I want to make sure that I get to know a lot of different people, a lot of different approaches, because covering this country here is a different challenge than a small country like Germany.” why so glum Sunil Gulati?
THE ONLY QUESTION I CARED ABOUT DURING THE PC:
On whether he would like to see a uniform style of play for the youth system in the United States, what changes he would like to see in the youth system and if that was a sticking point in the negotiations at any point:
“That was never a sticking point. It’s actually a fascinating point and I think, yes, the youth teams should reflect, again, the mixture of your cultures. It should reflect what’s going on in your country and there’s so much going on and that’s why I think Claudio Reyna’s roll is very, very important to find a path, with us together, how those teams should play and how they should be put together. There’s so much influence coming from the Latin environment over the last 15-20 years. It also has to be reflected in the U.S. National Team, and you have so many kids now with dual citizenship, Mexican or other Central American countries and American, so that will always be a topic to discuss. Obviously, you won’t have a copy in your Under-20 or Under-17 of the Men’s National Team because players are different. Players have all different characteristics, so every coach needs to find his own little path of how to put things together. But overall it should be a broader understanding of how also the youth teams should play, and this will be one of the main topics going forward. What started from U.S. Soccer with the youth academies, it will expand and will get bigger and bigger. All these discussions are important and also important for you, media, to have your say in it. I’ve talked to a lot of youth coaches, my boy is playing youth soccer, my girl as well, and they all wait for information. They are very knowledgeable on the youth level in this country but they also ask those same questions. I think there’s a huge opportunity to discuss things and bring different people in and hopefully define more and more how the style should look like.”

- Jürgen was a soccer prodigy from a very young age.  Jurgen actually scored 16 goals in one game and 106 goals in one season as a 9 year old for his hometown Gingen, Germany soccer team.

-Jürgen’s family owns and operates a bakery. Even though he signed his first professional football contract at the age of 16, Jürgen still studied to be a baker, earning his baker’s diploma in 1982 at Berufschule Hoppenlau in Stuttgart.

-Jürgen was the top scorer in the Bundesliga in 1988 and also earned the player of the year award for Germany.

-His first cap came in 1987, and just a year later, he helped lead Germany to a bronze medal in the 1988 Olympics.

-While in Europe, Jürgen met his wife, Debbie, an American working abroad. When Jürgen retired as a professional player after the 1998 FIFA World Cup, Jürgen and Debbie moved to the United States. They currently reside in California with their two children, Jonathan and Laila.
IN PICTURES:
Mediator Jürgen "STFU or GTFO, I don't care if you wanted an American coach!!" Jürgen 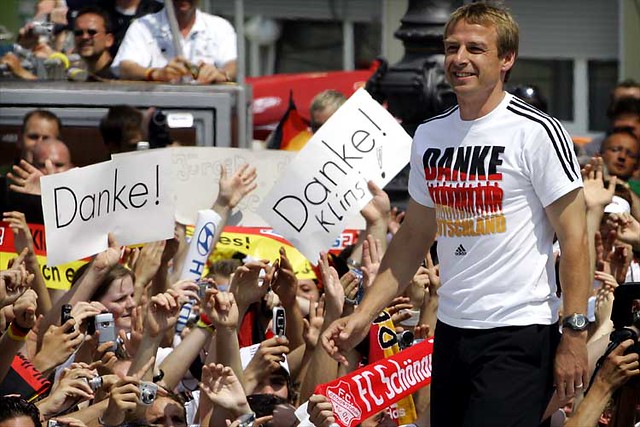 A WARM WELCOME to Jürgen Klinsmann!
MAKE US PROUD COACH!