DesiEnM was killed by LJ. rip ( 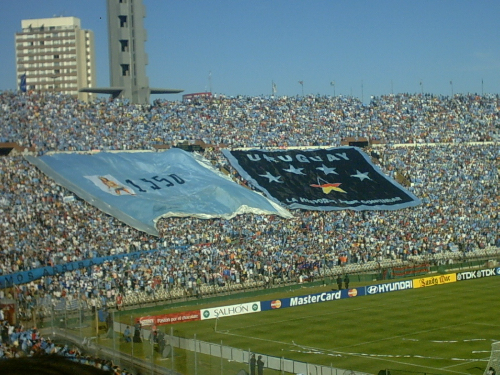 -Not so long ago Alvaro Recoba, the Uruguayan playmaker who starred for Inter Milan, was the world's highest paid player - a testament not only to his own fantastic skills but his tiny country's ability to produce high class players on a seemingly endless conveyor belt. Recoba was not short of confidence, and couldn't be accused of being too humble.

He was not in the least bothered when he upset Australian fans on the eve of Uruguay's World Cup qualifier against the Socceroos in Sydney in November 2005 with his declaration that Australia should not be able to stand in the way of a soccer power like Uruguay, a nation who simply deserved to appear at the World Cup because of their marvellous past.
''We're a big country with a big past and we've got a right to play,'' Recoba told journalists after a training session in Sydney as the Uruguayans prepared to defend (unsuccessfully, turned out) a 1-0 lead earned days earlier in Montevideo. ''Uruguay has a divine right to play … Uruguay is Uruguay''.

His view, regarded as arrogance by most Aussies, was merely a reflection of the central role football plays for Uruguayans. For such a tiny country, with a population of 3.5 million, football has, for most of the last 100 years, been the way in which the small South American nation projects an identity on the world. The game is hard-wired into the population and is followed with a devotion few here can imagine.
As a Uruguayan acquaintance here in Melbourne, Julio Languiller, put it to me earlier this week. ''The game is everything. Everybody plays from a young age,and when you are growing up the first thing you are told is how successful your forefathers were and how you have to emulate them. Everybody wants to play. Nothing else really matters in a sporting sense.''

When I covered the Socceroos 3-0 loss to Uruguay at the Estadio Centenario in Montevideo in a World Cup play-off in 2001 I was left with no illusions of the importance of the outcome. How the team played didn't matter, it was the result that counted, smiling taxi drivers said.
So toughs arrived at the airport to rough up the Australian party when it arrived, and crowds tried to create a cacophony outside their luxury hotel where they spent a week like prisoners in a gilded cage awaiting the game.

On match day the Centenario began filling five hours before kick-off, huge numbers wearing the light blue shirt, with sound systems blaring out salsa music and announcers denouncing the Socceroos as upstarts. The post match delight and partying was intense, and in a way it was easy to sympathise with them: they wanted the World Cup so much more than most Australians did. Disappointing as it was to bow out, it somehow seemed reasonable to do so for the benefit of fans who really cared about it.

Four years later in Sydney the situation had changed and the footballing gods frowned on Recoba's hubris on that occasion, when John Aloisi's spot kick in the tense penalty shoot-out sent the upstart Australians to South Africa at the expense of the shellshocked Latinos.

But that was a mere hiatus. In recent times the Uruguayans have shown their pedigree again. Inspired by Diego Forlan, La Celeste reached the semi-finals of World Cup 2010 in South Africa, where they lost in a thriller to the Netherlands. Having disposed of bitter rivals Argentina in the quarter-finals, the sky blues have reached the final of the current Copa America, where they will start tomorrow morning as favourites against Paraguay.
Should they win they will surpass Argentina as the country with the most Copa titles. The pair, who share so much emotion and history in the game, currently share that distinction, each having won 14. (the article is a week old, btw)

Can there be any doubt that, pound for pound, Uruguay is the best footballing nation in the world?

Sure, Brazil may have won more World Cups (five to Uruguay's two) and produced generations of star studded teams while ''big brother Argentina'', just across the River Plate, might have produced the greatest player of them all, the mad genius that is Diego Maradona. And supporters of Italy and Germany would argue that their World Cup and European Championship exploits plus the success of their club sides in European Cups gives them claims to the title of best in the world.

But those two South American powerhouses and the European giants have huge populations and much bigger, stronger economies.

If population and the size of a country's economy are factored in, surely no other nation can match Uruguay for sustained excellence and performance.
La Celeste goes back as far as 1916, when they went to Argentina and won the first South American championship (the Copa's predecessor) in the tournament's inaugural year, defeating the hosts in the final. At that time, and for the next 15 years, Uruguay was the best team in the world.
It won three of the next seven annual renewals of the South American tournament, and in 1924 and 1928 it confirmed its status as the planet's top football nation with victory in the Olympic Football tournament.
Two years later Uruguay's footballers, led by legendary captain Jose Nasazzi, etched the country's name in history by becoming the first ever winners of the World Cup, once again defeating Argentina in the final. The decider was staged in the Centenario, built for the 1930 World Cup and still the spiritual heart of Uruguayan football.
They also played a major role in the sociological development of South American football by picking black players of African descent for the national team. At the time football through much of Latin America was divided on racial lines, with most big clubs and national associations only picking white players.
Uruguay, which instituted a welfare program and had a more progressive government than the rest of South America at that time broke the colour bar and was rewarded for its vision.
And no country has inflicted a more heart rending defeat on the samba masters of Brazil than Uruguay.
In the 1950 World Cup final, the Brazilians were devastated when Alcides Ghiggia struck the winner just 11 minutes from time in front of some 200,000 fans in the Maracana in Rio, a blow that, despite Brazil's subsequent success, has never been fully exorcised.
Even now, says Languiller, ''whenever we play qualifiers away to Brazil we always feel we are a chance. And they never like to come here because they always remember…''
sauce