The latest FC Porto kits for the upcoming season were presented at The Yeatman hotel in Vila Nova de Gaia, overlooking the Douro River. The kits are in fact a working gear that, through hard work, can become tuxedos for the victories. On the players’ recommendation, the shirts are collarless, thus providing greater comfort.

Highlight goes to the fact that the home shirt’s central stripe is blue again. The away kit, in dark blue, has purple details that bring to mind the historic 2003/04 season. The inscription “Winning since 1893” can be seen inside all of the shirts. The technology used has remained the same: all kits are made from recycled plastic bottles.

More about the kits:
Footballers Hulk, João Moutinho, Rolando, James and Helton were present at the ceremony. The first two spoke to the media, highlighting the quality of the new kits, in addition to the work they have been carrying out in preparation for the start of the new season.

João Moutinho: “The new teammates are great”
“The new kits are great, even because they’re environmentally friendly. I hope they’ll bring us good luck and victories, like last year. We are trying to incorporate the coach's ideas with utmost rigor. He has his own ideas and believes he can further improve the team. The new teammates are both great people and players and I’m certain they’ll help FC Porto. We always aim to win all the competitions in which we play. We will give our all on the pitch to prove that we are the best.”

Hulk: remain “level-headed”
“All the kits are very good, very light, both the playing and the training gear. Personally, I’m eager to play and take to the field! We have to remain level-headed and humble. We’re working well, we’re concentrated and we’ll be focusing on our objective: winning titles. Coach Vítor Pereira helped us a lot last year and we will be doing our best to help him as well, to win the title once more. The best part of FC Porto is the locker room: those that have been around for a longer period help the others fit in quickly. I have five more years on my contract and will be pleased to fulfill them.”


Must see this video first: http://www.youtube.com/watch?v=yy1bzK_4VL4


or this (but the first one is better for obvious reasons):

(I don't know about you but I enjoyed their entrance up to the part where they unveiled the new kits. Felt like 5 Legolas/ Emperor Palpatine clones to me xD )


Moutinho really has his way of getting people's attention doesn't he? ;)

New goalie kit as modeled by our captain:

He couldn't stop smiling during the presentation :D

James with the jacket, looks cool no?

I still think the away shirt should be a lighter colour but it will do. And before you ask where is Falcao, he's at the Copa America busy scoring goals

James  has that genuine smile of "I'm so happy to be here". Awww

Another look at the new kits:

(He's not the Incredible Hulk for nothing ;) )
Note: Let me know if they missed something in the translations and I shall add it. I had the article from A Bola translated by a friend and this is what was said:

"The brazilian forward was chosen by the league as the best player of the 2010-2011 Championship, which is added to his title of top scorer. Hulk made it up to the stage twice on Thursday, at the organization's gala held in Porto, just hours after the draw for the new season's schedule. FC Porto, as national champion, also received the most awards of the night, earning best goalkeeper (Helton) and best coach (AVB).

And in that video, he said the award means a lot to him and he wants to share it with their teammates, then he says he has 5 more years+ in his contract with Porto.

(So happy that he got the best league player award, though I would be happy if Falcao got it, just more happy that he did! Hulk really had a great impact to the team all season long, the goals he scored and the goals he set up sure the focus was on Falcao in the end at the Europa League but try to look back especially during the first half of the season.)

Yes, 10-1! Woohoo we scored more than Benfica's 9-1 hehe! Rivalry aside, that was really amazing, 2 of the newbies from Maritimo scored - Kléber and Djalma and then a hattrick from no one else but Hulk! You can argue they didn't face a strong club but still it's a great confidence builder for players like Walter who might be the one in charge of scoring goals IF Falcao leaves this transfer window.

Coming soon in theaters near you:

Some training and friendly match photos:


James w/ his new adopted "guardians" Varela & Moutinho, since Guarin & Falcao are nowhere to be found 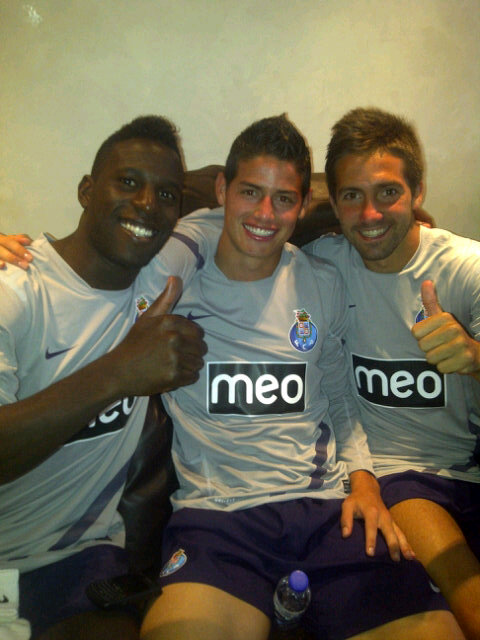 Quite the rockstar already you see? xD

You look at Ruben and go all "wtf?" when Varela pops in hahaha

LMAO, what is going on here?

Sapunaru and his ~new haircut (don't worry it will grow back)

Kelvin's a new kid in town but already ready to compete Guarin for the unique hair in the team.

The match vs Gütersloh

Move over AVB, our manager doesn't even have to pay attention to the match, he has more important stuff to do! jk xD

That's it for now, I'll try to post about Benfica or Sporting if I get some free time again. I apologize for the lack of Portuguese league updates as the 1st half of the school year here has started already.

More photos here: 1 2 3 4 and as usual I got the gifs from the queens of Porto stuff on tumblr