In honor of Copa America, El Grafico has composed 25 interesting facts about the competition!

1) Maradona and Pele have never won the Copa America.

2) The 2000th goal in the history of the competition was not made by a South American, but well remembered: "el Pajaro" Luis Hernandez (Mexico). The 1000th goal was made by the Chilean Enrique Hormazábal in 1955.

3) Oscar Cordoba holds the record of minutes without conceding a goal (540). He didn't concede any goals in Copa America 2001.

4) The Argentina-Bolivia game will be game number 700 for the Bolivian national team.

5) The Tucho Norberto Mendez is the top scorer of the Cup with Zizinho, both have 17 goals.

(Mendez)
6) The Uruguayan striker Elizabethan Gradín was the top goalscorerer in the first South American championship, running 400 metres in total. He won 5 gold medals at the South American level.

7) The Argentina National Team that participated in the Copa in 1917 then returned home after winning their first two games because the players had to attend to their jobs. They returned to Montevideo a few hours before the next match against Uruguay.

8) Also in 1917, the Uruguayan goalkeeper Roberto Chery died after suffering a problem with a hernia in the game that the Celeste beat Chile by 2 to 0.

9) In 1922, the Uruguayan team withdrew from the event, because of the referee in the match with Paraguay where they lost 1 to 0.

10) The 1930 World Cup final brought a break in relations between Uruguay and Argentina. That fight led to the interruption of the Copa America until 1935.

11) The final between Chila and Argentina in 1942 was strange. The referee called a penalty for Chile, but then pulled back his decision and decided on a free kick outside the area. Following this, the president of the Chilean Federation decided to withdraw the team. Consequently, the match was won by Argentina. (And we complain about the current referees).

13) Before starting Copa in Mexico, the coaching staff decided to separate the Ecuadorian Holguer Quiñones and Angel Hurtado because they were drunk.

14) Uruguay has a great record. It has never been beaten at home. Of the 38 matches at home, they won 31 and tied 7. Fortunately, this edition is played in Argentina.

15) In 1919, Brazil and Uruguay played a game that lasted 150 minutes. The meeting consisted of 90 regular time and 2 times more than 30 minutes each. At that time there was coffee and Veloz. (jajaja)

16) In 1916, South American, Alfredo Foglino was the coach of the Uruguayan. Foglino was only 23 years and was also a central defender.

17) In the competition of 1916, Hurricane player José Laguna sat as a spectator. However, with injury to a companion, he was called as an emergency player, and entered the field.He was commissioned to mark Argentina's draw against Brazil. The game ended 1 to 1.

18) In the absence of referees in 1916, the Chilean coach Carlos Fanta, and the Brazilian player Sidney Pullen dressed in black and led a couple of games.

19) The "Chilean" was named as such in the first Copa. Curiously the first to do it was the Spanish defender Ramon Unzaga, defending the colors of Chile.

20) Although Japan will not play the Copa America, the Japanese leading scorer in the competition is a Brazilian: Wagner Lopes with 3 goals. The only Japanese player who scored a goal in the history of the cup was Atsuhiro Miura.

21) In 1987, Argentina was the organizer of the Cup. The mascot was Gardelito. This year's is Suri, rhea. (this thing creeps me the fuck out)

22) Only two teams came out winners with a coach from another nationality. The Brazilian Danilo Alvim with Bolivia in 1963 and the English Jack Greenwall with Peru in 1939.

23) Mexico is the country most often invited to play the Cup, 8 total. And with this year Costa Rica has four while the U.S. played three. Japan, along with Honduras, played once.

24) Venezuela is the country that took the fewest points in Copa history. They've won only 10.2% of the disputed points.

25) In 42 editions of Copa America, Brazil has been the top scorer for ten competitions.


Argentina training! Everyone loves everyone! So much happiness!

after being kicked to the curb and replaced by Tevez in the starting line up, Angel has decided to play a different position.

the fuck is on your face messi

And the group pic! You can find it in super HQ with all the Copa players on the AFA Website.

preview for the individual pics:

ETA: BATISTA HAS JUST NAMED THE SQUAD FOR TOMORROW. 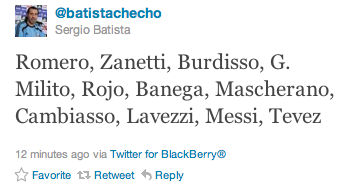