Hello. I would like to preface this post with a few remarks. I'm not trying to appear condescending or patronizing with all of this information. It's merely that looking back through the May 4th archives, I saw no Superga post, so I assume that the only reason for that can be a lack of knowledge of the tragedy, which is why I am giving the entire history of the event. It's one that is very important to my family, to Turin, to Italy, to the world of football, so I only want to give it the respect and recognition that the greatest tragedy in Italian football deserves.

Some background on Torino: though they are currently playing in Serie B, they are the fifth most successful club in Italy, and were, at the time of this tragedy, incredibly prestigious and important to Italy as a country. Torino had won the last Serie A title before the war halted play in 1944, and after football resumed, won four titles in a row.

My grandfather was twenty-four in 1949, and although he was born and bred in Milan and a rossoneri to his bones, he taught his children, and later his grand-children, that the Torino team of this time period was one of the greatest club sides, one of the greatest teams he had ever seen, that they would have made the Madrid of 55-60 and the Milan of the late 80s look ordinary. I can't say whether this is true or not—I never saw one of those teams live, much less all three as he did, but the memory of this Torino team is that of a legend. They were the totem of Italy's recovery from World War II. They were the first Italian team to play outside of the country after the war. They were the new, vibrant Italy.

This team, Il Grande Torino, never lost a match at home, and only two of their opponents kept clean sheets. In five seasons, they had 471 league goals, and in an international match, Italy vs Hungary in 1947, all ten outfield players on the Italian side came from Torino.

I'm sure that any Benfica fans on this comm know about Xico Ferreira. He was an amazing central midfielder with over five hundred apps for his club and sixty goals. In 1949 he received a transfer offer from Torino FC and was invited to go to Italy to discuss his future. (Previously in an international match between Italy and Portugal, he had met the president of Torino FC and become good friends with him.) Before the transfer talk could officially begin, although Xico had decided to make the move, Torino was invited to travel to Portugal and play Benfica in a memorial match for Xico.

As the plane took off to fly back to Turin from Lisbon, they encountered a thunderstorm, resulting in poor visibility, and the pilot descended in order to be able to continue the trip and fly by sight. While approaching Turin, he crashed into the back wall of the Basilica di Superga and everyone on the plane was killed: eighteen members of Torino's first team, five coaches and trainers, three journalists, four crew members, and one interpreter.

Only three players did not make the return trip and survived: Kubala, the Hungarian guest star who remained in Lisbon because his son was sick, Sauro who missed it due to picking up an injury, and youth player Luigi Giuliano who could not get a passport in time for the trip. At the time of the crash, Torino was leading the Serie A with four games left to play in the season. Forced to field its primavera, the four teams it had left to play (Genoa, Palermo, Sampdoria and Fiorentina) also fielded their primavera. Torino won all four matches and claimed the scudetto. It was their last trophy until 1976.
There was a charity game for Torino and the victim's families on the 26th of May of that year, the Torino Simbolo (made up of Serie A's remaining best) against River Plate.

Torino may no longer be “grand”. The football club you now associate with the city of Turin is probably Juve. But Il Grande Torino live on in the memory and hearts of all who know of their story, and they will never be forgotten. 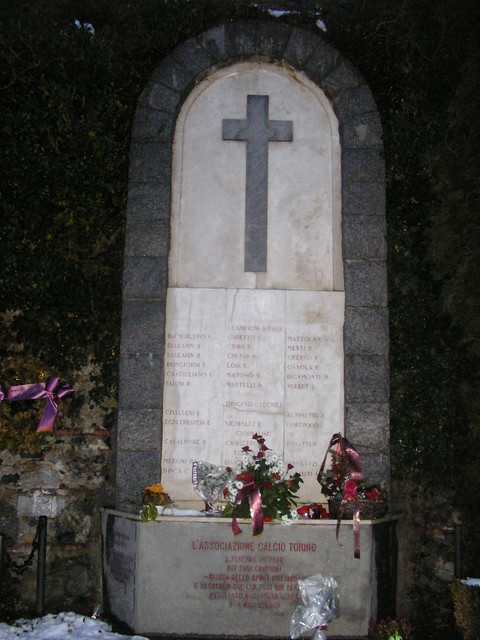