Stuart Holden out for 6 months 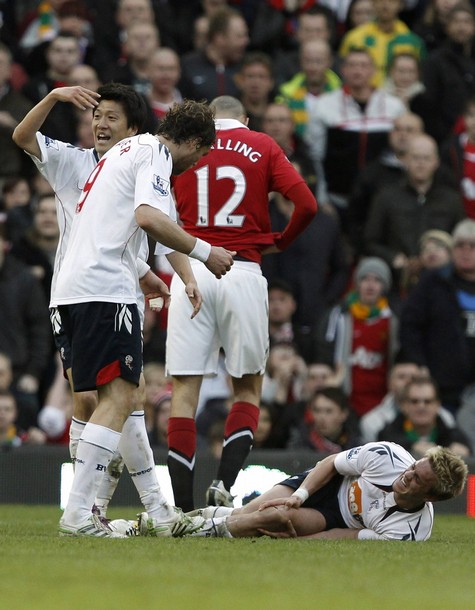 Bolton Wanderers midfielder Stuart Holden has been ruled out for six months as a result of the injury he sustained in a challenge on Saturday.

Holden was rushed to hospital following a 1-0 defeat to Manchester United as a tackle from Jonny Evans, which drew a red card, left him with a nasty gash on his right knee.

He was given 26 stitches to close the wound and X-rays confirmed Holden had avoided a break, but he also underwent an MRI scan to discover if he had suffered any ligament or muscular damage to his knee.

Bolton have now said the midfielder, who had a prolonged spell on the sidelines last season following a tackle from Manchester City's Nigel de Jong, will be out for six months, meaning he misses United States' Gold Cup campaign in June.

Manager Owen Coyle told the club's official website: "First and foremost our main concern is for Stuart and his recovery. He will get all the time and support that he needs.

"Stuart has been outstanding for me this season and he has shown in his performances that he is one of the best midfielders in the Barclays Premier League. He has such desire, strength of character and a winning mentality, and he will draw on all those attributes in his rehabilitation."

Defender Gary Cahill has absolved United defender Evans of any blame for the tackle which resulted in his dismissal at Old Trafford.

"It would be a massive blow but it looked like a really bad gash, and I hope that's all it is, for the team's sake," Cahill told the Bolton News. "Maybe the international break might have come at the right time for him, in a recovery sense. Touch wood he isn't out.

"From where I was stood, he had his studs up, but no-one goes into a challenge looking to hurt someone, or at least you'd hope not.

"Nobody goes into a tackle thinking 'I'm going to do him here' and I think Evans just went for the ball and had his studs up a little bit. It was unfortunate in all circumstances, and Stu has come off worse."

So sad he's missing the Gold Cup with USA this summer. I feel like he always gets injured right before he gets to play with the NT. He also posted on his Twitter that he's having surgery in London today. Good luck, Stu!
Tags: club: bolton, nt: united states, stuart holden
Subscribe
Previous
← Ctrl ← Alt
Next
Ctrl → Alt →
Previous
← Ctrl ← Alt
Next
Ctrl → Alt →