Welcome to… the most disorganized football country in the world

So I thought of making a post about the Brazilian series A, but it won’t make much sense if you’re not familiar with the clubs, the rivalries and the regional particularities of the country. So here’s a little intro to both of those things:

So, first of all, it’s a big country, that had serious issues with interstate transportation for a very long time – for that reason, the first thing that became popular (and still is pretty popular to this day) were the state championships, with fierce local rivalries that made winning those much more important in the minds of fans than the ill organized national tournaments.
All states have local clubs, but out of the 27 states in the federation, roughly about 9 have a bigger football tradition, producing clubs that are actually competitive in a national way and boast significant supporters across state lines, with emphasis in Rio de Janeiro and São Paulo, that have clubs supported by large numbers of people from all over the country, followed by Minas Gerais and Rio Grande do Sul that have slowly but surely grown in the past couple of decades from local to national powerhouses.

To sum it up, biggest or traditional clubs come from these places:

So what is the biggest club in Brasil? Well, that depends. Are we talking about the one with the most supporters? Or with the most passionate supporters? The one that has won the most local titles? The most national and international ones? Well, those are all different answers, and there isn’t even a consensus for some of those.
Let’s break down the major clubs in the big 4 footie states then: 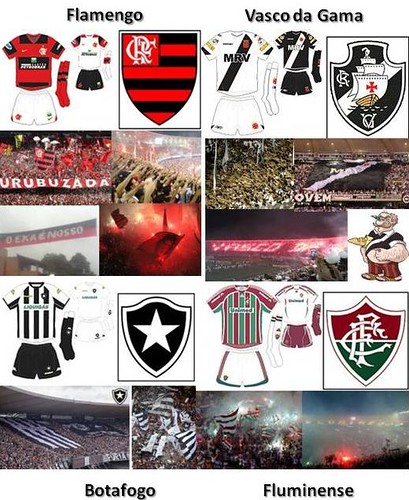 Flamengo is the biggest club in Brazil when it comes to supporters, with a reported fanbase of 17% of the country’s population (roughly 33 million supporters). Why, exactly, is a mystery – before winning last year’s championship they hadn’t won a single significant title since 1992 – yet, somehow, their massive fanbase never shows any major significant drop.

Vasco da Gama Founded mostly by Portuguese immigrants and named after Portuguese explorer Vasco da Gama, the team has a historical significance for its early fight against racism, being one of the first in Brazil to include members of all races, not only among its players but also club officials. Vasco has revealed one of the greatest strikers in history, Romário. Recent years that included not only a small number of achievements but also several corruption scandals with its presidents, made a dent in the club’s reputation. But you certainly wouldn’t notice that at the stadium, since in Rio, they’re often able to equal arch-nemesis Flamengo in terms of Ultras.

Fluminense is the biggest winner of Rio’s state championships in the 20th century, but national achievements have been few and far between, specially in the club’s recent history, having won its last Brazilian Championship in 1984. It has to be said, that even during the worse days of the team, something that never fails are Fluminense’s supporters, known as “The Beautiful crowd” , for the peaceful and enchanting spectacles they often offer. The club also has the only ultra in the world started by women, “Flu-Mulher”.
“Fluminense is the only tricolor in the world, the rest are just teams with three colors”

Botafogo, or the Lone star club, is a team of many highs and lows. It produced one of Brazil’s most mythical sports figures, the great Garrincha, or “angel of bent legs”, and due to his popularity, the club was one of the most successful and supported in the 50’s, 60’s and even 70’s, but years without any major wins slowly drove fans away. Recently, the club started re-emerging as a serious title contender on a national level. 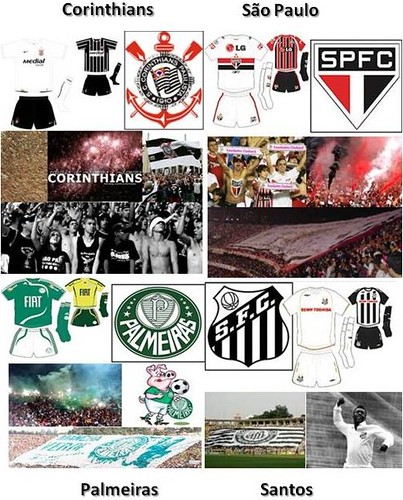 Corinthians Corinthians was founded by a group of laborers hoping to create a popular club in the city of São Paulo to play against the elite clubs that already existed. That remains Corinthians face to this day, a team for the masses, and the second most supported in the country, with over 25 million followers. In a similar situation as that of Flamengo, Corinthians huge numbers and passionate fans don’t necessarily reflect large accomplishments on field, as the team went 23 years without winning anything.

Palmeiras, was founded by Italian immigrants and originally called “Palestra Italia”, being forced to change its name during WWII. The club has been pretty consistent in alternating periods of incredible success with some of intense failure, and right now they are facing the latter. In a bid to go back to its glory, the club has recently re-hired the Chilean Harry Potter.

São Paulo is the most accomplished team in the country in terms of both national and international titles, and its numbers of supporters have slowly and steadily grown to reflect that in the past 20 years, with recent polls showing them at the 3rd or 4th position in the country. However, a lack of traditional ultras or popular displays of support have kept them away from the collective consciousness when it comes to naming the major team supporters in Brazil. They also have a tradition of not selling players, instead, they prefer to tie them up in ribbons and give them away as gifts to Italian clubs, as could be seen in the case of Kaká and recently Hernanes. The team usually has a conservative style of play that has assured steady wins in the past few years.

Santos is a team based in a port town not far away from the state’s capital. It is usually quickly associated with its most famous player, Pelé, who remained with the team for 17 years and helped them achieve 2 international titles and several national ones. Santos was the first team in the world to pass the 10,000-goal mark in 1998. They pride themselves in their youth system, having produced in recent years players like Robinho, Diego, Elano and recent successes Neymar and Ganso.
Futebol Mineiro – Minas Gerais 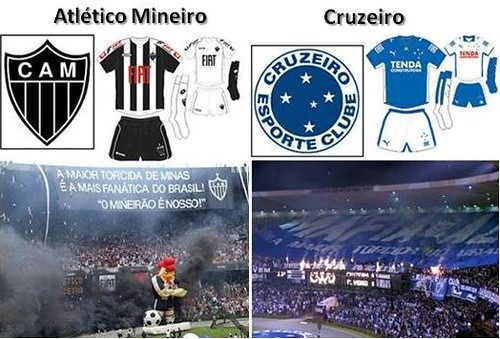 Cruzeiro, in a similar situation as that of Palmeiras, was born from the desire of the Italian community living in Belo Horizonte to have a team of their own. They established themselves as one of the most successful teams in the country’s history, being one of the 3 teams that have never been relegated. They’re also probably either the smartest or luckiest team in history when it comes to selling and buying players, as no one ever gets the upper hand on them. One of its most famous discoveries in recent years is Ronaldo, and the club has a large numbers of supporters in Minas and outside of the state.

Atlético Mineiro. Must be tough being a supporter of Atlético, or Rooster (Galo), as the club is known by its supporters. This isn’t the club with the largest number of supporters, but it definitely has the most passionate and dedicated ultra in Brasil, that even came in second in a worldwide research done by a football mag a few years ago. Still, all that passion isn’t really reflective of success on field, as the club just can’t catch a break in recent times. Not only do they have to deal with the good phase their arch nemesis Cruzeiro is going trough, but also every new hire they make somehow seems to fall flat, no matter how good it seems on paper. Like one of their supporters said in a recent interview, “If Messi came to play for us, he would certainly forget how to play football all of a sudden”. 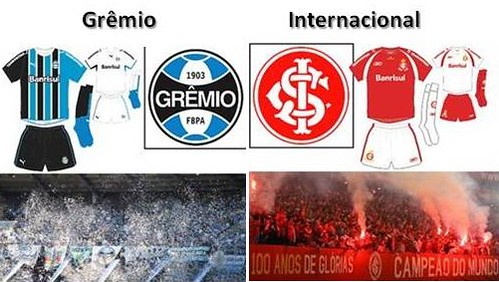 Grêmio, formed mostly by German immigrants, Grêmio was the big fish in its state up until the last decade, having a close competition with local rival Inter for state titles, but far surpassing them in national and international titles, which helps explain its heightened popularity in comparison to Inter. One of its most famous original players is Ronaldinho, who even became a cartoon character while wearing Grêmio’s jersey.

Internacional was founded as an attempt to form a democratic football club in the area, since the existing clubs restricted its membership to allow only people of German origin. The name “Internacional” was chosen as a symbol that people of all origins would be allowed to play. After playing second fiddle to local rival Grêmio for a very long time, the club decided to invest in a membership program, a common system throughout Europe but rarely used in Brazil, that allowed them to expand their income and slowly build a solid team that managed, in the past decade, to equal Grêmio’s accomplishments, most recently winning the Copa Libertadores for the second time. Today, they are the biggest team in Latin America in terms of associated members. Recent discoveries were players Alexandre Pato and Nilmar.

Even though these aren’t always reliable, the last on research on supporters had these data:
Team and its supporters, in millions - 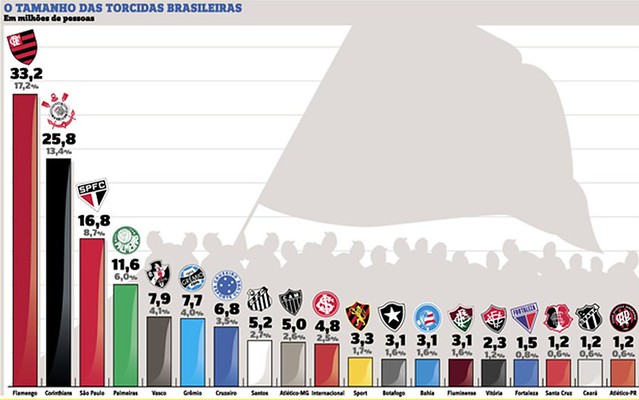 As for Series A - prior attempts had been made, but real improvements in transportation and infrastructure since the 50’s only made it possible for the establishment of a nation-wide championship in 1971 - the Campeonato Brasileiro Série A (commonly known as rouBrasileirão).

Today, the basic infrastructure of football in Brasil is this: The calendar goes from late January to December, with clubs playing in their state leagues from January to April, and national championships going from May – December (the prestigious Series A, plus series B, C, D and the “Copa do Brasil”, that gathers the state championship winners). Since 2003, Series A has maintained a strict, European-style system of relegation and promotion, as well as the standard home-and-away schedule. But the biggest problem facing the game in Brazil is the disruptive wholesale player and management shifts that occur each season. Brazilian clubs are constantly selling off their promising players to European clubs. And with the season stretching from May to December, just as the season starts taking shape, the August transfer window for European football begins. And once clubs sell off their best players, the inevitable dip in form usually calls for a managerial change. In 2008, only 4 clubs (Gremio, Palmeiras, Santos, and the champions Sao Paulo) kept their manager the whole season.

So… don’t get attached, cause if good things start happening in your club in January, by July those things will likely be gone.

Every year, at least one big club in Brazil gets relegated and one small one makes it to a surprising position – currently the championship is in its 15th round (out of 38), with Fluminense as the lead and Corinthians, eager for a title in the year of its centenary, breathing down the carioca’s neck. Mantaining the tradition of the little team that could, Avaí, a small club from the state of Santa Catarina competing in the championship for the second year in a row (and fifth time in its history), holds the third spot. 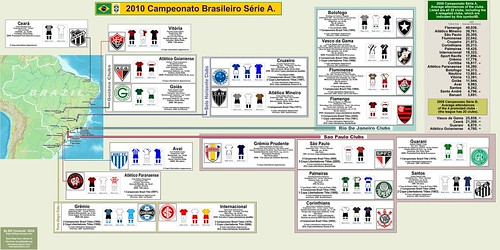 PG = points gained; J= Games played.
First 4 qualify for next year’s Copa Libertadores, teams in Blue for Sudamericana and pink ones are in the relegation zone

Well, Tyfyt in this encyclopedia postannica :-) I was going to add some videos of the local ultras, but this is already long enough, so if people want to add some in the comments for the teams they root for, feel free to do so :D