No one cares, but still

Tonight is the last day of Libertadores, the most prestigious club competition in South American football (SA Champions League). The name of the tournament is a homage to the Libertadores (Portuguese and Spanish for Liberators), the main leaders of the independence wars of South America. The winner plays at the FIFA Club World Cup, a competition contested between the champion clubs from all six continental confederations.

So I thought I might sum it up a bit:


The format isn’t that different from the Champions league, for those that are familiar with it – there are six stages, beginning in early February. The six surviving teams from the first stage join 26 teams in the second stage, in which there are eight groups consisting of four teams each. The eight group winners and eight runners-up enter the final four stages, better known as the knockout stages, which ends with the finals anywhere between June and August. Unlike UEFA CL, the format for the finals is also that of two-legged games instead of a single match.

Traditionally, teams from 10 different countries in South America qualified, plus the defending champion. Brazil and Argentina each have 5 spots, while Uruguay, Chile, Paraguay, Peru, Bolivia, Ecuador, Colombia and Venezuela have 3 spots. Since the late nineties, Mexican teams started taking part in the competition thanks to quotas obtained from the Pre-Libertadores, which pitted Mexican and Venezuelan clubs for two slots in the group stage. This year, 40 teams competed in the tournament, with the last six spots going to the current champion, Estudiantes, 3 invitees from Mexico and 2 more Mexican teams that had to withdraw from the 2009 competition due to the H1N1 situation.

So, tonight we have the second leg of the finals, between Club Deportivo Guadalajara and Sport Club Internacional. The first leg was played on August 11th in Guadalajara's home field, and ended with a 2-1 score in favor of the Brazilian club.

Mexican football club based in Guadalajara, Jalisco. Guadalajara plays in the Primera División de México (Mexican First Division) and is one of the most successful clubs in Mexican football, having won 11 First Division titles, 7 Campeón de Campeones and 2 Copa México. Guadalajara is one of the ten founding members of the Mexican First Division and along with rival Club America it has never been relegated to the second-tier division. This is Chivas first Libertadores finals, and they could become the first Mexican winners of the Cup.

Brazilian football team from Porto Alegre, Rio Grande do Sul. The club is one of only five teams that have never been relegated to the second-tier division since the first national championship, played in 1971. In over 100 years of history, the team revealed several great players like Chilean Elias Figueroa and Brazilians Falcão, Valdomiro, Taffarel, Dunga, Alexandre Pato, Rafael Sobis, Nilmar and Lucio. They have previously won the 2006 Copa Libertadores, when they defeated the defending champions São Paulo. Internacional also won the 2006 FIFA Club World Cup, the 2007 Recopa Sudamericana and the 2008 Copa Sudamericana.

If anyone is interested, again, the match will be tonight, at 22:00 pm (Brasilia time - time zone converter) and you can watch a Live Stream over here: Inter x Chivas

…And to end things, here is a little map with all the teams that participated this year, with a bit of info on each one of them (click to enlarge, huge map, etc): 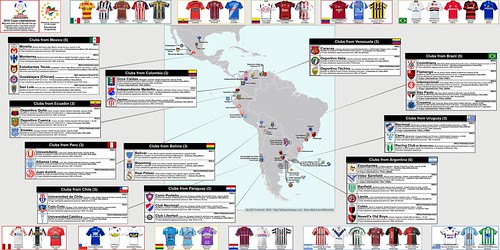