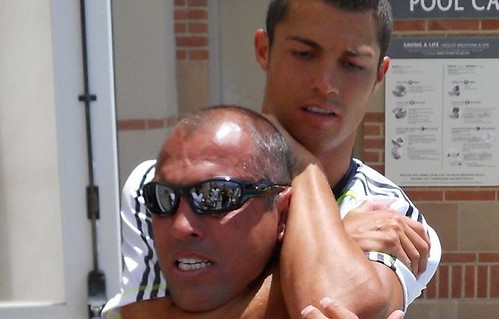 While in Los Angeles, the Real Madrid stars enjoyed a break from training by learning a few strokes of Brazilian Jiu-jitsu. Royce Gracie and Pedro Valente Jr. are the masters who taught a little bit of art to the players, who were very interested.

Apparently Royce children are a fan of football, and he had asked Real Madrid to meet them. So after training, Cristiano Ronaldo, Kaka, and Marcelo declared that they are also a fan of Royce.
Cristiano Ronaldo said that since he was a kid, he had all the recordings of Royce’s fights and was impressed of how he could beat opponents that much taller than him. Kaka and Marcelo showed an interest aswell, as Royce explained the importance to learn jiu-jitsu for every athletes, just to make them feel more secure and confident.
The two masters of Brazilian jiu-jitsu made a point to teach some scams to Kaka and Cristiano Ronaldo.

And on Saturday, Cristiano Ronaldo, Kaká, Pepe and Marcelo had dinner together at Fogo de Chão, a steakhouse restaurant chain from Brazil.

I promise I tried it, but I just couldn't add a tag :(