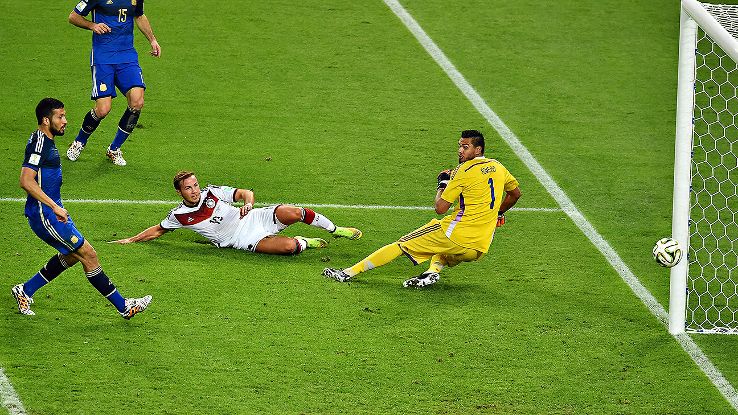 Mario Gotze has decided to auction off the very left boot he so deftly dangled to score Germany's World Cup-winning goal during extra time in 2014's final against Argentina, with all the proceeds going to a German childrens' charity.

Gotze is selling his famous yellow boot to raise funds for "A Heart For Children", with the man himself rousing potential bidders by adding that the boot also comes complete with a small bonus amount of the famous Maracana turf still affixed to it.

"I have never washed the shoe. It is still in the same condition as it was in Rio, when I left the stadium with it," the 22-year-old Bayern Munich star told Bild.

"There is still grass on it. I have never put the boot on after the final. I kept it safe at my house."

Gotze has apparently rebuffed an avalanche of offers for his World Cup-winning boot since the 113th minute of the final back in July, with the Bayern forward keen to use the interest in his footwear to raise as much money as possible for a worthy cause.

"I was often asked, many were interested. For example, sponsors, other companies and friends," he added.

"The one who makes the largest donation to "A Heart for Children" in the seven days before the TV gala gets my World Cup boot!"

lol, aw. I know we tease Peasant King a lot but this is such a nice thing to do. I really like this style of fundraising more since it encourages everyone to donate rather than have one person to donate a lot.

though seriously lmfao. Are you supposed to wash shoes?

Real Madrid squad received a watch worth £24,000 for La Décima win alongside a bonus of half a million EACH!