PETER LAWWELL believes Celtic could be one of the biggest clubs in the world if they could tap into the riches of the English Premier League. 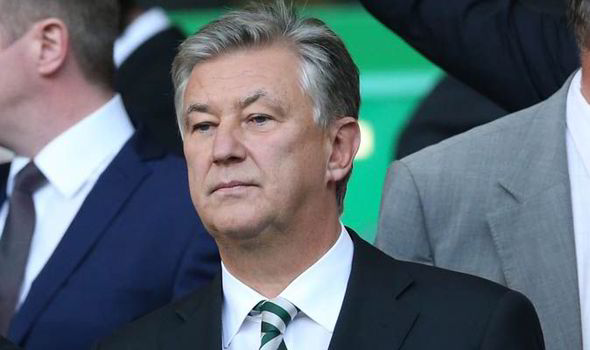 
The Hoops will bank just £1.8million from television revenue for winning the Premiership – compared to the parachute payment of £65m to a club relegated from England’s top flight.

And Lawwell claims Celtic would dwarf Manchester United, Barcelona and Real Madrid if those riches were open to them.

Lawwell said: “I believe that. If you go back 25 years and compare us to Manchester United before the media and revenue boom there probably wasn’t much in it 25 to 30 years ago.

“Our story is unique. I think it is rich and it’s the best.

“We have a potential fanbase with Scots and Irish diaspora around the world that would support that.

“And we have fantastic, strong fundamentals here in Scotland from our fanbase.

“I don’t see any barrier if you compare Celtic to Manchester United or Arsenal, the top clubs down there.

“I don’t see any barriers if we were getting the same media values as they are getting regularly.

“The media values will outweigh those in Spain or Germany.

OP Note: Thought I'd start a bit of Sunday night discussion, even though this is an article from a couple of days ago. Do you think he has a point? Could Celtic and/or Rangers benefit from entering the EPL like Swansea?

Real Madrid are coming to Melbourne as part of a feast of international football next July.

The series of friendlies, part of the International Champions Cup, will take place at the MCG on July 18-24.

The reigning European champions and FIFA Club of the 20th Century will be joined by an English Premier League team and Italian Serie A side.

Organisers said the other teams, rumoured to be Manchester City and Inter Milan, would be revealed in the next few weeks.

The long-rumoured event was confirmed on Monday morning by the Victorian sports minister Damien Drum.

Drum said he expected the three fixtures would generate around $50m to the local economy.

BTW, this was the Guardian's caption for the above photo:

Some updates have been made to the ONTD-FB Calendar (to the newbies and lurkers on this comm, yes we have a calendar!) and I thought I'd post it here.

1. There was a problem with the Bayern Munich fixtures for this season. It has been fixed.

2. Thanks to Sky Sports, the Real Madrid fixtures for this season have been added! Also, the next Copa del Rey match (against Cornella) has also been added.

3. Barcelona fixtures for this season have been updated! The Copa del Rey matches have also been included.

4. Fixtures for Roma for this season have been added!

5. Fixtures for Atletico Madrid have been added!


You can access the link in the sidebar at the left of the homepage but for good measure, here it is again: CLICK ON THIS

We also have a calendar on TeamUp which is very empty: CLICK ON THIS

Other things that will always be repeated here:

1. Anyone can add fixtures to, and edit the TeamUp calendar!

2. Also, note that all fixtures are in the London timezone (currently UTC) and will adjust automatically when daylight savings begins again.

3. If you would like to be an administrator of the Google calendar, you can PM me your email address (it has to be a Google account) and I can make you one.

5. Since this is a Google Calendar, it can be synced with iCal and Microsoft Outlook as well!

Now, do you know that we have private Fantasy Football leagues for the Champions League, Premier League and the Euro 2016?

Have a great week, everyone! My precious troll thanks you for your time!

What was your main motivation to join FC Bayern München?

Xabi Alonso: I felt I needed a new step in my career, a new challenge, and there was no better place to come. I had played for my hometown team Real Sociedad, for Liverpool, for Real Madrid, and it was the best place to come: a new country, a new league and a top club in the world [at which] to be fighting for trophies. So far, so good – I feel I have the confidence of the manager and my team-mates.

Are you enjoying Munich?

Alonso: Yes, of course – it's a fantastic city and a great place to live. So far, my family and I are really enjoying it. We have settled in well.

How good is your German?

Alonso: It is a hard language, but day by day I am learning a little bit. But it is still early days to do this [interview in German]. We will leave that for the next one.

There are some pictures and also a short video interview at the source.

FIFPro, the World Players' Union, and FIFA today announced the five goalkeepers shortlisted for the FIFA FIFPro World XI 2014 as part of the 55-man shortlist to be revealed on Monday 1 December 2014. Last year's winner and two debutants are among the five nominees.

THE GOALKEEPER SHORTLIST IS

Bravo and Courtois have no tag? :(

Arsenal striker Lukas Podolski has delivered the latest in a series of protestations against his bit-part role at the club, insisting that he will not be taken for "a buffoon who sits out his contract in the stands".

The Germany international has yet to start a Premier League or Champions League game for Arsene Wenger's side this season.

He has already indicated that he will seek a decision on his future in north London in January, though he would be keen to stay at the Emirates Stadium if given more game time.

"I love London, I love the club but I don't like the situation," Podolski told Kicker.

"I'm not a buffoon who sits out his contract in the stands. I have to try to talk to Arsene Wenger. I want a fair chance."

Germany coach Joachim Low has previously suggested that the forward should "think about his situation", though both Koln and Schalke have ruled out bids to sign him this winter while Wenger says that he is not for sale.