Nigeria won the 2013 Africa Cup of Nations and will hope to defend their title in Equatorial Guinea. Photograph: Armando Franca/AP

Equatorial Guinea, one of Africa’s smallest countries, will replace Morocco as hosts of the 2015 Africa Cup of Nations finals, the Confederation of African Football (Caf) confirmed on Friday.

Morocco wanted the tournament postponed over fears of a spread of the deadly Ebola virus but the Caf refused and on Tuesday stripped the north African country of the hosting rights.

The oil-rich Spanish-speaking Equatorial Guinea hosted the 2012 finals with their neighbours Gabon but will take on the 16-team tournament on their own from 17 January to 8 February.

It is not clear whether the new hosts will be able to play in the tournament. Equatorial Guinea were disqualified from the preliminaries for cheating.

Caf said the decision on the new hosts was made after a meeting in Malabo on Friday between Equatorial Guinea’s president, Teodoro Obiang, and the Caf president, Issa Hayatou.

“The head of state of Equatorial Guinea agreed to host the competition. As a result, the Caf executive committee confirm that the tournament will go ahead and Equatorial Guinea will compete as the host nation,” a statement from African soccer’s governing body said.

Equatorial Guinea had been disqualified from the preliminaries in August for fielding an illegible player.

Matches will be held at four venues in Bata, Ebebiyin, Mongomo and the capital Malabo. In 2012, the tournament was hosted in Malabo and Bata while the draw for the finals will be in Malabo on 3 December.

“Caf wishes to express its sincere thanks to the Equatorial Guinean people, its government and particularly president Obiang,” the statement concluded.

Of course, a dictatorial country with one of the worst human rights records in Africa get to host. Not to mention, they cheated during the qualifiers. Hmmm, I sense a pattern here. 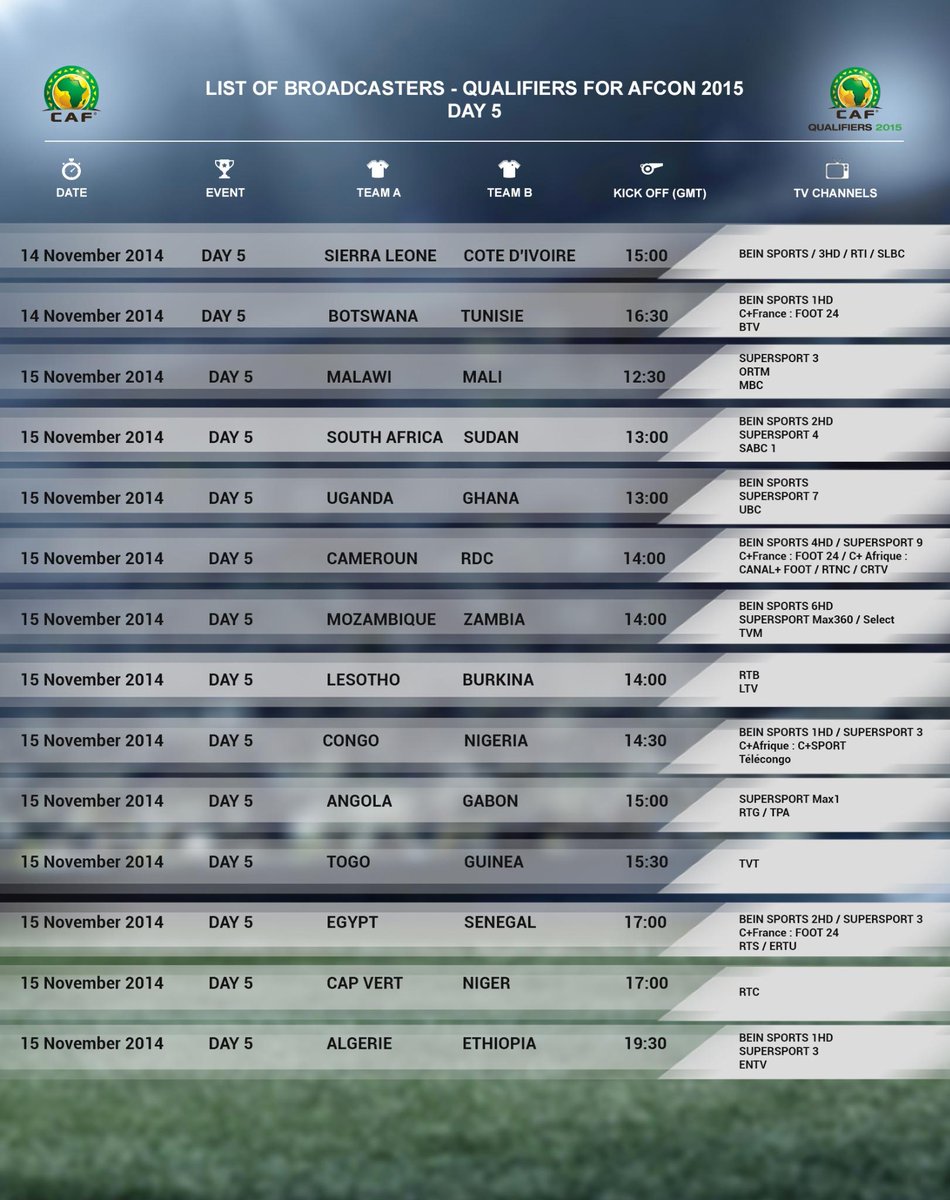 Times are GMT
(Note that the first two games listed above are for Friday games...beIN is scheduled to repeat the Sierra Leone-Cote d'Ivoire game on Saturday.  The first game kick-off for the day is 12:30 PM GMT)

(This is a scheduled post. May not be around for these games. Hopefully there is enough linkage to ensure your match enjoyment. The final set of qualifiers are scheduled for Wed., Nov. 19th)

It is that dreaded Saturday when the international break is in full flow! Hundreds of thousands of fantasy premier league managers are going to be thinking of weird and wonderful things to do to fill their time! Or they will be just be drowning in their own self pity with some pretty severe withdrawal symptoms.

What are you up to today to fill the void?

We did produce this top 5 fantasy football tips page to give you chance to check you are sticking to the basics - might fill 10 minutes on a dreary Saturday afternoon.