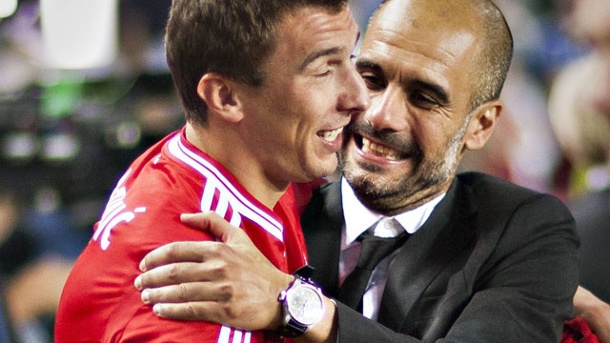 Zlatan Ibrahimovic will have someone new to talk to at his meetings of the Pep Guardiola Haters Club since Mario Mandzukic has revealed his own dislike of the manager after spending a season with him at Bayern Munich. Now at Atletico Madrid, Mandzukic, who scored a career high 26 goals last season across all competitions, has told Sportske Novosti his true feelings.
From Football Espana:

“Guardiola disappointed me because he didn’t treat me with respect and it was twice as good when Jupp Heynckes was there,” said the 28-year-old, who joined Atleti in the summer for an undisclosed fee.
“Would I sit down with Guardiola for a coffee? That is something that’s not going to happen.
“In my professional life I don’t have to like everyone but if I feel a negative energy coming from a person then I try to avoid them.
“I didn’t deserve to be treated like that after giving everything for Bayern for two seasons.
Ibrahimovic, who ripped Guardiola in his book "I am Zlatan" after their one season together at Barcelona and recently blamed the manager for the team's failure to win the Champions League that year, will surely be eager to teach Mandzukic the club's secret handshake and warn him not to eat the potato salad that Jose Mourinho brings to meetings.

There really does seem to be a trend of Guardiola leaving talented strikers feeling disrespected by him. Even before Ibrahimovic and Mandzukic, there was Samuel Eto'o. From ESPN:

"I first of all reminded Guardiola that he'd never been a great player," Eto'o told BeIN Sports. "He was a good player, that's true. I told him. As a coach, he had proven nothing. He came in and didn't even know the story of the dressing room.
"Guardiola has never had the courage to say things in front of me. He passed by the players. Xavi told me they wanted me to stay but I had to talk to Pep. I say 'never, if you do not respect me, I do not respect you'.
"Pep told me how to move like a striker. I told him: 'You're not normal!' The true story is that Pep didn't respect the things in football.
Guardiola's success as a manager is undeniable and his preference for a false nine over reliance on more traditional strikers is well documented, but if he doesn't change his attitude towards these types, Robert Lewandowski might be the next to join this club.

(UPDATE: Despite being widely reported, there doesn't appear to be any reference to Guardiola in the attributed Sportske Novosti interview with Mandzukic. Though they are in line with what Zlatan and Eto'o have said previously about Guardiola, it's probably best to take the Mandzukic quotes with a grain of salt until they are confirmed or denied.)

Whatever, Pep. Mandzukic is perfect for Atleti. El Cholo>>>>>>