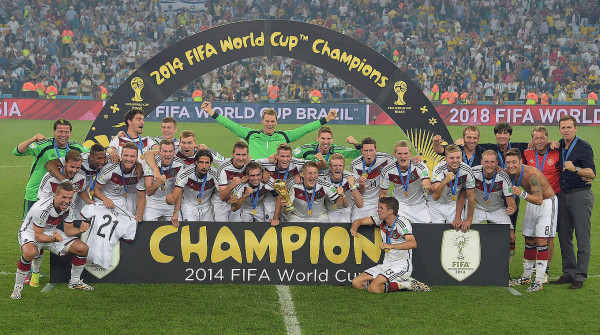 DFB confirmed in their press conference earlier that there will be a movie, titled "Die Mannschaft", coming to the cinema on November 10th and to TV in December. It's 90 minutes long. They will show the complete World Cup including the preparation, beginning with the training camp beforehand, spanning up to the reception in Berlin. They'll use their own and press materials as well as TV pictures from FIFA and the TV stations. But they'll also show self-filmed videos by the players, coaches and staff - especially the hours after the victory and the night of celebration. [Oh dear, we'll see a lot of funny drunks.]

There will be a photo book too, titled "Eine Nacht in Rio" (A Night in Rio).

(Bonus quote from the press conference: Manuel Neuer: "I can't give any prognosis regarding Lewandowski, but there have been whole training units when he didn't score against me.")

Tomorrow's press conference will feature Thomas Müller and Christoph Kramer. That should be fun.

ETA: They have a number of new videos up, including "Training impressions" which is mostly slow-motion scenes by someone who wishes they could have been a proper artistic editor. It does have very soulful looks of a drenched Mats Hummels for those who like that sort of thing.

Crinkly ears Mesut Özil suffered from a partial rupture of the lateral ligament in his knee. Will be out for at least 10-12 weeks.

Any other injuries of players at the moment?

The Indian Super League will start on Sunday with typical Indian largesse, flinging together the social and celebrity elites and attempting to tap into the passion for the beautiful game in pockets across the nation. The states of West Bengal, Maharashtra, Goa and Kerala have had various versions of semi-professional football for decades, and everything that came with them: passion, partisanship, rowdy fans, the occasional lathi charge. But until this brainchild of the All India Football Federation and the sponsors the Reliance Group, the current I-League format remains a disparate collection of mini-leagues.

And yet still, young boys zipping about on patches of dry grass and industrial estates try to imitate their heroes – Messi, Rooney, Neymar and Ronaldo – plugging away at this second-tier sport in a country enslaved by cricket’s heavenly bails. There is a historic precedent; in the 1950s and 60s India came fourth at the 1956 Olympics and won two Asian Games gold medals. But since then domestic football has stagnated, stuck with several problems such as how to raise its profile and how to translate the enthusiasm for watching football into something practical.

Apparently, the Calcutta-Bombay match is sold out. All 120,000 seats.
Collapse