(mods: i hope that this post is okay -- our two comms are affiliated and i didn't see anything against promos in the rules) 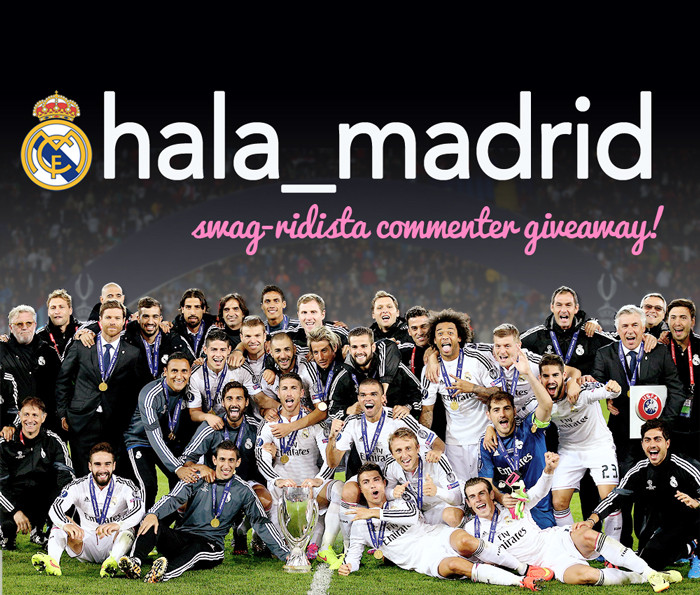 hala_madrid, livejournal's biggest and most active real madrid fan community, is holding a year-long swag giveaway for its members. everyone who posts an entry to the community or comments in one of our madridista matchspams is eligible, with monthly prizes and a year-end grand prize of an official real madrid jersey!

i know that there's a big overlap between here and hala, so many of you may have read about this there, but we're always looking for new members, and we're especially eager to have newbies and lurkers participate in the contest. you can read the full rules here, as well as a FAQ.

hala_madrid has mirror accounts on both twitter and tumblr. that way, you don't have to check the comm all the time to keep up with what's being posted; you can just follow these accounts to receive real-time posting alerts to your twitter feed or tumblr dashboard:
twitter - @halamadridlj
tumblr - halamadridlj.tumblr.com

hala madrid, and i hope to see you guys around!

Goal looks at 10 classic moments when those in charge have lost their temper and flung abuse at journalists, fellow coaches, referees, players or even entire clubs

Football management is not a job for the weak-willed or faint-hearted.

Stack together a few defeats and all of a sudden journalists are asking difficult questions, your own fans are baying for blood and former footballers are making negative comments about your character.

So it's no wonder that even the most experienced have snapped from time to time, and even the most level-headed have lost their temper. The latest to be afflicted was OFI Crete's boss Rino Gattuso who launched an astonishing attack against the press a few days ago.

Below, Goal looks at 10 of the most memorable moments when coaches have let their calm demeanour disappear and gone on an unexpected rant for all the world to see or hear about.


Which rant is your favourite? I think I'm gonna have to go with Trapattoni's one on this, haha. Any good one missing from the list?

This poll is closed.

Open to: All, detailed results viewable to: All. Participants: 36

Do you want the white default comment section or the one we have now?

Poll should work. In case it doesn't, answer in the comments. You have until Saturday 11:59 pm BST.

Have a lovely weekend!

The Emir of Qatar, Sheikh Tamim bin Hamad Al Thani, believes his country will host the 2022 World Cup despite Fifa’s ongoing investigation into the bidding process and concerns over when the tournament will take place.

Fifa’s ethics chief, Michael Garcia, this week reiterated his call for his report into the 2018 and 2022 bidding processes to be published in full. However in his first interview since succeeding his father, Sheikh Hamad bin Khalifa Al Thani last year, the Emir dismissed concerns over corruption. “People should understand that Qatar had the best bid, and Qatar will provide and will do one of the best World Cups in history and I’m sure about that,” he told CNN.

A Guardian investigation earlier this year revealed that hundreds of migrant workers have died in Qatar since construction of the World Cup stadia began, with the International Trade Union Confederation estimating 4,000 could be dead by the time the World Cup begins.

“Yes, it’s true – we had problems,” the Emir said. “We’re solving the problems. We’re enforcing the laws – it’s not acceptable.”

“We changed the laws. They are enforced and there are many laws that have been changed. And I’m telling you because I am personally hurt about the situation.

“All the media is concentrating on Qatar due to the World Cup. If we have problems I don’t mind talking about the problems. But also we need to talk other – about other things, about those laws that we did.”

The players’ union FifPro and several major European leagues have voiced their concerns at the prospect of the World Cup being played in summer temperatures up to 45C, with Fifa due to decide in February whether to move the tournament to the winter months. However, the Emir insisted that hi-tech air conditioning systems could make it possible to hold the tournament in summer.

He said: “We have this technology for ten years now and it’s working in one of our stadiums. One hundred per cent it will be working.

“Our bid was for it to be in summer. At the end, it’s up to Fifa to decide when is the best time. We’re ready for both.”

An interesting article from Fortune on why the World Cup will be held in Qatar: HERE

The governing body should enforce its existing rules over the controversial player-financing practice rather than outlaw it.

There will be a normalisation period of three to four years before the practice is banned altogether. There is, however, already a line in Fifa's Regulation and Status of Players document - Article 18b.

It reads: "No club shall enter into a contract which enables any other party to that contract or any third party to acquire the ability to influence in employment and transfer-related matters its independence, its policies or the performance of its teams."

Rather than ban TPO outright, it would have been more appropriate for Fifa to regulate it better. There are other solutions and not just ones which benefit the splendidly remunerated clubs in western Europe.