Have a good Sunday all! 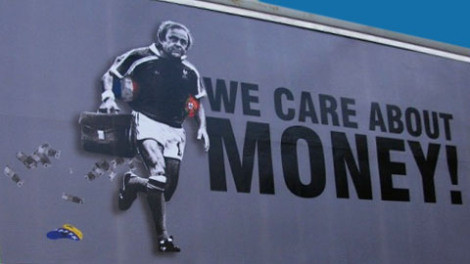 By his own admission, Harry Redknapp is not the first person you’d consult on matters of economic importance. He told police investigating him for tax evasion a few years ago that he was “completely and utterly disorganised”.

Nevertheless, the Queens Park Rangers manager was on to something when he recently criticised the financial fair play rules that threaten to bankrupt his club in the not entirely implausible event of its relegation to the Football League.

Redknapp didn’t bother with the legal case against QPR, which comes down to alleged overspending, but instead focused on the principle of fair play. “Fair play would be everyone having £30m a year to spend,” he said, sounding like a man who isn’t in danger of mistaking Das Kapital as some unknown side from the Bundesliga. “To make it fair play,” he added, in case there was any doubt about his egalitarian point, “we should be able to spend as much as Manchester United have spent before we play them on Sunday.”

As it turned out, QPR were not able to match the £151m United have splashed out this season, and promptly lost 4-0. That’s football, but is it fair?

The British are renowned for a sense of fair play – or at least we tell ourselves we’re renowned for it. We don’t dive in football, and we always walk in cricket. And the Loch Ness monster is a unionist – which is not to say there isn’t a residue of truth in the myth of sporting decency.

Simulation is at least still seen as fundamentally dishonest. And even if there’s a tendency in some quarters to accept it as part of a modern professional’s tactical portfolio, there persists an ideal of fair play, albeit one that’s more recognised in the breach than the observance. So when certain foreigners – José Mourinho, the Chelsea manager, comes to mind – want to flatter us, they speak of this ideal as a cultural fact.

Yet what does a dive here or there matter – after all, referees have the power to punish divers – when the whole business, and therefore game, of football is rigged in favour of the super-rich?

Football has never been an exercise in equality. There is no such thing in sport – or life – because the talented and the dedicated will invariably triumph. Going back to its humble beginnings, when it grew out of workers’ associations, football was always a meritocracy. But it was a meritocracy that operated within sustainable limits. The distance between the bottom and top was difficult, but not impossible, to traverse. That’s what accounted for the giant‑killing romance of the FA Cup, and that’s what enabled Brian Clough’s modest Nottingham Forest, as late as the 1970s, to go from the Second Division to the pinnacle of Europe inside four years.

...keep reading at the source

ONTDF, do you think UEFA should change their financial fair play rules?