Results of other internationals played today:


Remember the last time these teams played each other? That was one hell of a match.

In the most shocking news you've ever heard in your whole fucking life, Mario Balotelli and his "fiancee" (lol - why the fuck did they bother?) are off. 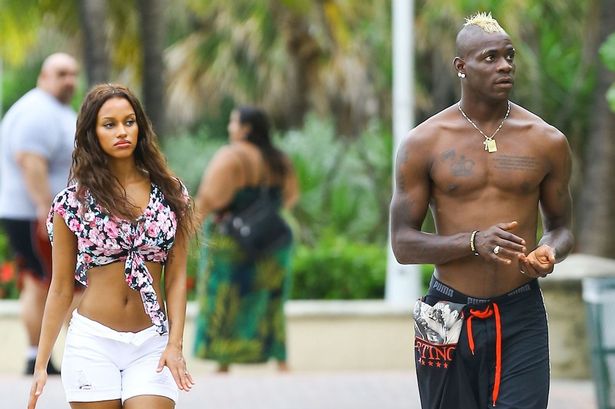 And they always looked so happy and involved in pics...

I know. You can't believe it.

And yes, there's reportedly a glamour model in the picture. An "unknown" glamour model, according to the report in Metro.

Fanny, dear. I would like to congratulate you on your escape. You can do better than a guy who spent 18 months ignoring his new-born with previous, long-suffering ex-girlfriend Raffaella Fico, and who might set your bathroom on fire with fireworks.

In other, shocking, completely out of character news, Mario had to be subbed off in a friendly against Wolves behind closed doors because he either argued with the ref or kicked a player in the head or some variation on that. And the Mail told us he'd reformed...

whendoesbalotelligethisfirstredforliverpool.com is available and I'm thinking of acquiring it.

Angel Di Maria has taken a spectacular swipe at former club Real Madrid, claiming the European champions did not want him to feature for Argentina in this summer's World Cup final.

The former Benfica winger completed a €75 million move to Manchester United in August after helping his national team to the final of the showpiece in Brazil, where they were beaten by Germany.
Di Maria inspired Madrid to the Champions League and Copa del Rey last term but found himself surplus to requirements after the signings of Toni Kroos and James Rodriguez, and he has now revealed his frustrations with the club began in the summer, when they requested him not to risk aggravating an injury sustained during the finals.

"I got a letter from Madrid that arrived at 11:00 on the day of the [World Cup final] asking me not to play," he explained to America & Closs.

"We were playing at 16:00 and I was preparing myself to be in the best condition, knowing that I could have got injured. As soon as I go that letter, I ripped it up. I did not care, no matter what."

"I talked with coach Alejandro Sabella and it was his decision. I didn't want to pressure him. I knew I could have to come off after 15 minutes and left the team in trouble, I didn't want that."

Madrid president Florentino Perez and coach Carlo Ancelotti have both indicated that Di Maria requested to leave the club this summer, but the player himself has refuted the claims and says he has never had a professional relationship with Perez.
"I saw what he said. To be able to earn what Cristiano earns I would have had to have been the best player at the World Cup or won the Ballon d'Or," he continued.

"It looks like Perez gave that offer to another person. I don't have a clue who he offered that to. I don't have a working relationship with him. When I signed a new deal he wasn't there either."

"I never said I wanted to leave Real Madrid, I never wanted that, but you have to move on when they don't want you. Let them say what they want about me, the millions they received for selling me will help the Real Madrid economy a lot."

Cristiano Ronaldo has been vocal in his support of Di Maria in the wake of his Bernabeu exit and the 26-year-old believes the Portuguese star may also move on in the coming years after he expressed a wish to return to Old Trafford one day.

"Cristiano was always on my side," he continued. "He fought for me to stay. I don't know how long he will stay at Madrid."

more words about stuff at the source.

None of these opinions are mine, I just needed my pedi to dry

Firstly, updates on our calendars:

Of course, you know where the calendar is but here is the link again: GOOGLE CALENDAR

And here is the link to our somewhat empty TeamUp Calendar: TEAMUP

Remember, anyone can add/edit the TeamUp calendar.

1. All timings in the calendar are in the London timezone so make sure to adjust for daylight savings.

2. If you would like to be an administrator of the Google calendar, you can PM me your email address (it has to be a Google account) and I can make you one.

3. Match dates/timings are subject to change. I've also created calendars for various leagues for this purpose. These will be updated automatically in the event of any changes to the schedule.

Now that all the boring stuff is out of the way, did you know we have a private league for Champions League Fantasy Football?

And in case you missed it, we have a private league for Premier League too!


Have a great weekend everyone! Newly crowned Emperor Basti and Sir Biebstuber thank you for your time!