Pep Guardiola has implemented a strict regime of discipline on his Bayern Munich players in a bid to mentally toughen them for the new season.

The squad were subjected to a talk from their head coach at the beginning of the season, in which he outlined his new stick over carrot approach, and reportedly told them, 'from now on, this is all completely compulsory'.

At the centre of the new idea is a rigorous system of fines for small indiscretions, which the German press have christened 'Guardiola's punishment catalogue'. Punishable indiscretions involve arriving late to team meetings, not observing dress codes, failing to put dirty clothes in laundry bins, and taking phone calls on the first floor of Bayern's training ground HQ on Sabener Strasse.

Other clubs probably have such rules, but I can imagine Pep being really intense about it. The Spaniard's move is subject to him agreeing personal terms and passing a medical on Saturday.

DONE DEAL: @XabiAlonso has completed his move to #FCBayern! Contract between FCB & @realmadriden signed. He will say his farewells at 11am.

Real Madrid C.F. and Bayern Munich have reached an agreement for the transfer of Xabi Alonso.

The player will speak to the media today (Friday) at 11:00h in the Santiago Bernabéu press room, alongside director of Institutional Relations, Emilio Butragueño.

The squad for Germany's international matches against Argentina and Scotland are:

Basti and Mustafi will travel to Düsseldorf with the team, but will not feature in the squad (not 100% fit).

No Lahmpoleon. No Miro. No BFG. 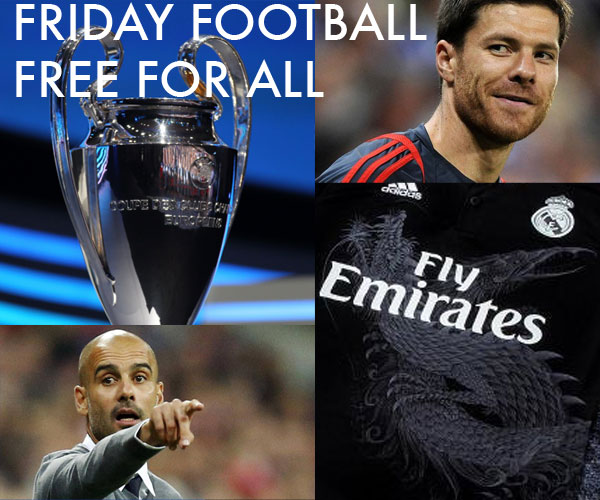 Have a great weekend!

Kagawa's manager has been at the Borussia Dortmund office today.

Can I say that I hope this deal will go through. For Kagawa and for Dortmund. We'll probably hear more news as the day goes on, tomorrow at the latest.

Shortly after Xabi's press conference, another press conference was held in Spain. This time it's for the Spain NT call-ups! With the retirement of Arbeloa, Villa, Xavi and Xabi this year, Del Bosque will be calling in some new blood for La Roja (four five in particular!). Once the team qualifies, they will be defending their 2012 title at the 2016 Euros in France.

Don't think he named a captain yet but most likely, it's Iker Casillas. Vice captain will either be Sergio Ramos or Andres Iniesta. Most likely Sergio as he's the second-most capped player on the squad. Iniesta is also possible so it's not an "RM dictatorship" (as the Iker/Puyol and Iker/Xavi past partnerships have suggested.) Unless otherwise stated in another article, Seriker will be leading the squad with Iker as captain and Sergio as vice.

Their friendly vs. France will be on September 4 while their Euro qualifying match vs. Macedonia will be on September 8. This is only the squad for these two matches so things could still change for their matches vs. Slovakia (October 9,), vs. Luxembourg (October 12), vs. Belarus (November 16), and vs. Ukraine (March 27).

** Edited with corrections and additional info!