Reports say that Bayern will pay €24m (+ €6m bonuses) for him. Great deal for Bayern considering Roma said in the beginning of summer that they won't sell him for less than 60M.

Bonus cause it's funny now

First post here! I hope I did everything correctly.
Is it just my computer or the tweets really won't embed properly? T^T

Frank Lampard has called time on his international career, having won his 106th cap for England at the World Cup. Photograph: Mike Egerton/PA


Frank Lampard has announced his retirement from international football.

The 36-year-old midfielder has called time on his England career which has spanned 15 years and earned him 106 caps.

Lampard said in a statement released by his management company: “I have taken the decision to retire from international football. It has been a very tough decision for me to make which is why I have given it so much thought since the World Cup.”

Lampard made his 106th and final appearance for England in the goalless draw with Costa Rica at the World Cup as captain, with Roy Hodgson’s men already eliminated from the tournament in Brazil, in what was also Steven Gerrard’s last international match.

He added: “I have always been exceptionally proud and honoured to represent my country and have to say looking back I have enjoyed every minute of wearing the England shirt.

“Due to my club career now going in a different direction it is of utmost importance for me to consider my family first – also, to concentrate on how I can perform consistently to the best of my abilities over my next few years in club football.

“It is now the time to move forward and I feel very confident that, with Roy Hodgson in charge, the young players that we have coming through and the changes that are being made throughout the development of the youth system in this country, we will have success in the future and a team that this country deserves.

“I would like to thank all the managers that I have worked under, all the players that I have been fortunate enough to play alongside, and all the England fans for their support, not only at home, but particularly on their travels with the team around the world.

“I now look forward to continuing to support the team as a fan and wish them every success for the upcoming campaign towards France 2016.”
SOURCE

Ángel di María admits: It was never my desire to leave Real Madrid

Ángel di María has admitted he never wanted to leave Real Madrid for Manchester United following his £59.7m British record transfer that was completed on Tuesday.

In an open letter to Real fans Di María wrote: “My cycle at Real Madrid has come to an end. It’s impossible to capture everything I’ve experienced here in a few lines but I hope this letter communicates what I feel at the moment. I had the honour to wear this shirt for four years and I feel nothing but pride for what I went through and achieved with my team-mates.

If you want to read the full letter,

Legia Warsaw mock Celtic on Twitter after their Champions League defeat to Maribor.

Celtic lost to Legia 6-1 on aggregate in the third qualifier, but were controversially reinstated after the Polish club were effectively thrown out by Uefa for fielding a player who should have been suspended.

Thumbsy is 'not shocked' by Manchester United’s defeat to MK Dons.

Louis van Gaal admitted he was not shocked after overseeing one of the most humiliating evenings in Manchester United’s recent history. His side were thrashed 4-0 by Milton Keynes Dons in the Capital One Cup and it could have been worse as the League One side missed several other chances and were also denied what seemed a clear penalty.

Party time for Peru and Iceland 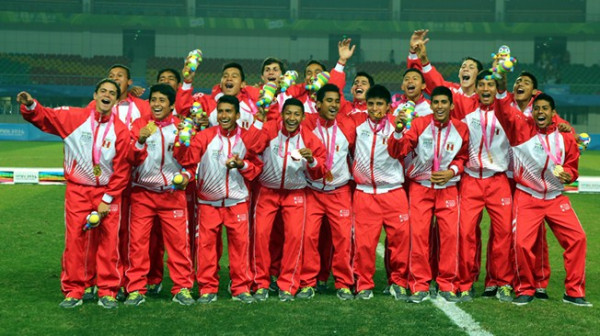 THE DAY REPLAYED: In a spectacular end to the Boys’ Youth Olympic Football Tournament Nanjing 2014, Peru won a historic gold medal after beating Korea Republic in the final. Meanwhile, Iceland capped off an impressive maiden campaign at a FIFA competition to deservedly take a podium place thanks to a comfortable victory over Cape Verde Islands.
( Collapse )

Maybe this means we'll go to the World Cup one day, maybe not

I announce my retirement from international football. It's been an enormous honour for 11 great years. Sincere thanks to everyone involved.

Rumours persisted, however, and following the disappointment that was the past World Cup for the Spanish team, fans and pundits assumed the country's most successful generation of footballers were ready to pass the torch to a new group of players.

Alonso won one World Cup and two European titles with La Roja, with his proudest moment coming in the final of the 2010 World Cup. Nigel de Jong unleashed a devastating kick to his chest, leaving him in obvious pain. Alonso soldiered on, however, dominating play in the centre of the pitch as he always did.

The legendary holding midfielder made 114 total appearances for the squad. While Alonso never received the kind of send-off he deserved (Spain crashed out of the 2014 World Cup at the first hurdle), there's little doubt he will be widely hailed for a glittering career in the national jersey.

Anchoring one of the best group of midfielders football has ever seen, the Spanish team was nearly unbeatable in major tournaments for four straight years. The group were finally able to win the nation a major trophy, as Spain hadn't emerged victorious on the highest level since the European Cup of 1964.


I'm so nervous/excited/scared about the Arsenal match. And happy birthday to Nikica Jelavić, Sulley Muntari and Deco.
Collapse