Landon Donovan will retire at the end of the 2014 MLS season according to Taylor Twellman. Donovan, who turned 32 in March, has been with the LA Galaxy since 2005. Donovan has scored 105 goals in 229 appearances for the club.

All of this is from multiple sources and nothing is concrete but basically Twellerman aired it out. I'll update.

BREAKING: Landon Donovan to retire at the end of this season, according to multiple reports. Details to come. pic.twitter.com/bU16dipij8

After careful deliberation, I have decided that this will be my last season as a professional soccer player https://t.co/UuxXkXlYi1

Monaco are confident Radamel Falcao will remain at the club despite Real Madrid continuing to be linked to the prolific forward.

Falcao, 28, has been strongly tipped to follow the path trodden by James Rodriguez earlier this summer between the principality and the Spanish capital, despite having signed a five-year contract with Monaco only last summer.

That speculation only intensified after his agent, Jorge Mendes, was spotted earlier this week meeting Madrid president Florentino Perez, who has publicly stated his admiration for Falcao.
( Collapse )

Usually Real Madrid gets what it wants... 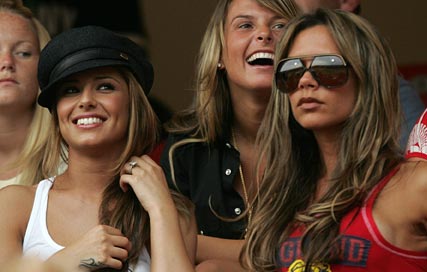 The former queens present you a very organized pic spam list of the current WAGs of the world.

Tell us, who is your favorite WAG?

Pep Guardiola, second right, stands with his coaches during the singing of the US national anthem.
Photograph: Ted S Warren/AP


Pep Guardiola refused to shake hands with counterpart Caleb Porter after his Bayern Munich team lost 2-1 to the Major League Soccer All-Stars on Wednesday, apparently upset about some heavy tackling in the game.

Pep stealing the team's thunder as usual. Is it too soon to say that he's a household name in America now? Who knew a harmless friendly could turn out to be so messy? Every major news outlet has covered it.

Also, it's not mentioned that they apparently shook hands later.