Sami's childhood club is Oeffingen. Today they greeted him like a home-town hero (his t-shirt reads: "Once an Oeffinger, Always an Oeffinger) and named the stadium after him! 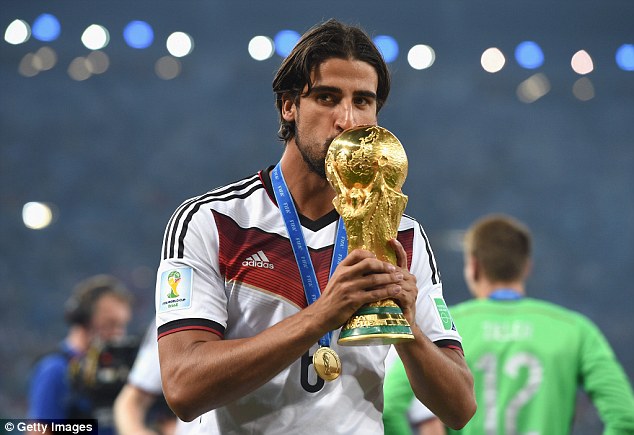 The Guardian reveals that Luis Suárez will appear before the court of arbitration for sport on 8 August as Barcelona seek to have the Uruguay forward training with them in little over two weeks.

CAS has summoned Suárez to appear at their headquarters in Lausanne, Switzerland, after it agreed to fast-track the appeal against his four-month ban from all football-related activity for biting Giorgio Chiellini at the World Cup in Brazil. The case will be dealt with at an “express” hearing, with a decision likely just a few days after Suárez and Barcelona present their case.

If the appeal is successful, the 27-year-old could train start with his new team-mates as early as mid-August, although his suspension from playing is almost certain to be unaffected.

As things stand he is likely to make his debut against Real Madrid on the weekend of 25 October.

Fifa upheld Suárez’s four-month ban at the beginning of July after an appeal by the player and the Uruguayan football federation, but it confirmed that the ban will not stand in the way of any transfer and he completed his move from Liverpool to Barcelona the following day.

Barcelona defender Gerard Piqué believes an “angry” Suárez will be desperate to prove himself when he returns to action.

“I expect that he, like anybody who has the possibility of having their work taken away from them, will be feeling rage,” Pique said.

“For the time being he has to wait,” added the Spain defender. “When he returns he will be full of desire to show that he is one of the best forwards on the planet.”

Steven Gerrard: I told Luis Suárez he was too good for Arsenal

Steven Gerrard has said he understands Luis Suárez’s desire to join Barcelona and added that he was pleased the striker did not sign for Liverpool’s Premier League rivals Arsenal last summer. The Liverpool captain also feels that Liverpool would have been favourites for the title this season – had Suárez stayed.

“I would have been really sad and disappointed to see Luis go to Arsenal. With all due respect to them, I said to him that he was too good for Arsenal. I said if you score 30 goals for us and win the PFA player of the year, the press player of the year – I knew he was going to win them – I told him Real or Barcelona will come for you.”

Gerrard added that Suárez had earned his dream move by working hard day in and day out in training and during matches. “I’m disappointed to see him leave now but I am happy for him that’s he has got what he wants and deserves. Since day one he has been phenomenal in training every day and in the games. I think he got the wrong advice last year from people around him, from people saying he needed to play in the Champions League and it did not matter who it was for.

“I have experience of the Spanish clubs myself and I know if you play well they will come back and come back. I knew they’d be back for him as well. I just thought for his own sake, to get respect off the Liverpool fans, he had to give us at least one year. A lot of people might still think he should have given us one more, but my big dream was to play for Liverpool, and the foreign players’ big dream is to play for Real Madrid or Barcelona, that’s a fact.” which one of you made this

There are also several EL qualifiers. Here is a list: http://en.wikipedia.org/wiki/2014–15_UEFA_Europa_League

Fernando Torres is staying in Chelsea

There had been rumors about a possible transfer from Chelsea to Atletico Madrid, the striker's first club. However, in an interview with SkySports, Chelsea's current manager, Jose Mourinho, said Fernando Torres is not going anywhere.

"We have a good squad. The perfect squad would be with this 18 players, not 17 or 16, but rules are rules and we are working hard, even here, for not to have these kind of problems in the future.

"We want to have more English players in our squad which we are going to have in the future but in this moment we are still in the middle of this process.

"So at the moment we have to make a decision about one player not to be on that list.”

When asked whether that player was Torres, he answered:

"No. Three strikers is fundamental in a squad and we have three strikers; Fernando, Didier and Diego so one of them is not going for sure,"