THIS ONE IS BEST:


I'M NOT EXCITED AT ALL OMG


IF IT FAILS WATCH KICKER


OMG IT'S SO EXCITING

Luiz Felipe Scolari has resigned as manager of Brazil, the national football federation announced on Monday.

The 65-year-old stood down as the World Cup hosts could only finish fourth, having been thrashed in their semi-final 7-1 by Germany, who went on to lift the trophy in Rio with victory over Argentina, and then beaten 3-0 by Holland on Saturday.

The decision was formally announced on the Brazilian Football Confederation website, www.cbf.com.br, following a meeting between Scolari and president Jose Maria Marin, who is scheduled to step down next year in favour of Marco Polo Del Nero.

Only last week Del Nero had given Scolari, who guided Brazil to their fifth World Cup success in 2002, his full backing following the humiliating defeat in Belo Horizonte, which the one-time Chelsea boss described as the "worst day" of his life.

However, it now appears all parties have agreed a fresh approach is needed to rebuild Brazilian football, with Scolari's current contract, which expired at the end of the World Cup, not to be renewed.

A statement from the CBF read: "Coach Luiz Felipe Scolari and his fellow coaching staff surrendered their positions to the board of the Brazilian Football Confederation. The resignation was accepted by president Marin, who was keen to thank all the coaches and players and, by extension, the Brazilian fans for their support throughout the World Cup campaign.

"Scolari and his entire coaching staff deserve our respect and gratitude. They were responsible for returning to the Brazilian people your love for the team, despite not having achieved our greatest goal."

The statement added that Scolari had restored pride to the Brazilian flag and that Marin would give a media conference to expand further.

The 2014 World Cup was the first time in some 39 years Brazil had tasted defeat in a competitive fixture at home, having lifted the Confederations Cup 12 months ago.

Scolari became the subject of the Brazil fans' frustrations during the Holland game in Brasilia, when his picture on the big screen was met by loud jeers.

What lies ahead for Scolari is now unclear, the former Portugal manager having also been in charge at Bunyodkor of Uzbekistan and Brazilian club Palmeiras before returning to take over the national team two years ago.

Scolari, however, knows how history will now view him.

"I will be remembered as the coach to lose 7-1, but I knew that risk when I took the job," he said last week.

"The person who decided the line-up, the tactics, was me. It was my choice."

Brazil, meanwhile, will take their time before appointing a permanent successor, with under-23 coach Alexandre Gallo reportedly likely to be the interim caretaker.

Among those expected to be in contention for the full-time job include former Corinthians boss Tite and Muricy Ramalho of Sao Paulo as well as former Brazil boss Vanderlei Luxemburgo.

Brazil have never appointed a foreign coach, although Spaniard Pep Guardiola was linked with the position before he took charge at Bayern Munich.

i feel badly that his legacy ends up like this 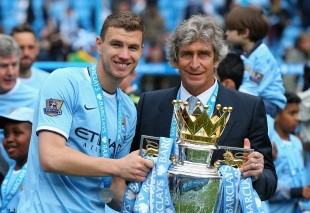 Brazil has never had a national coach that wasn't Brazilian, but perhaps they were impressed by Pellegrini's resumé. He is the only coach to take two different teams to the Champions League quarter-finals in their debut seasons in the competition.

Marcos Ferreira, vice president of the Brazilian Football Confederation, said it's dumb to think that the Brazilian coach could not be from a different country: "We haven't thrown ourselves into the task of looking for a replacement, but the new manager has to be someone who changes the players' mentality and the way they act. It's a silly idea that he can't be a foreigner."

So the boys have returned to the homeland after fighting tooth and nail at the World Cup in Brazil. (They won second place. They're silver medalists. Silver = Ag = Argentum, which is where the name Argentina came from. Neat fact, right? Hahahaha.) After the final, Sabella received a call from Argentinian President, Cristina Fernandez Kirchner (CFK), who requested the presence of the Albiceleste at a function.

Also the Hand of God spoke (not at the function, but he had some words to say about his heir's consolation prize.)

From the Gospel according to Maradona: "I would give him any award, but when it's not fair and when marketing people make him win something that he didn't win, it's unfair because (Arjen) Robben played an exceptional tournament and because Thomas Mueller made an incredible sacrifice against Argentina. I feel sorry for my country. Mario Goetze’s goal really hurt. There’s a huge sadness in my heart that we lost the final. All things put together, I think Argentina deserved at least penalties. That Germany won was the result of a misunderstanding in the Argentine defence. I could see he didn't want to go up and collect it."
Basically, even he didn't think Messi deserved that Golden Ball (who did, really? Not even I, a Messi stan, felt he deserved it.) Messi didn't even need it anyway... Hell, Messi didn't even WANT it. If Messi knew any better, and if it had to go to an Argentine, he would give that award to Masche (who, according to the article, "completed the most tackles of anyone at the World Cup.")

Summarized from the Daily Mail with added commentary from me

EDIT: There's another video here involving Lavezzi and Sabella. Really cute vid! You can also hear CFK calling Lavezzi the sex symbol of the national team. (I see no lies, though.)
Collapse