Germany midfielder Mario Gotze has encouraged his team to show a greater killer instinct in front of goal when they face Ghana on Saturday evening. 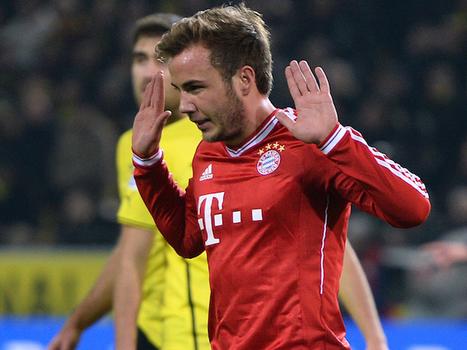 "But I ain't scoring them!"

A hat-trick from Thomas Muller helped Germany record a 4-0 triumph over Portugal on Monday evening, but despite the wide margin of victory, Gotze has insisted that they should have netted more goals.

The 22-year-old told Kicker: "We could, in some situations, have got more goals against Portugal.

"The result was pretty good, but in the first half, we got a penalty and the red card played into our hands."

Germany will all but secure their place in the last 16 if they can overcome the African nation.

good luck today germany! good luck to ghana but wishing you less luck because i'm obviously supporting germany. may none of you have a spanish moment <3

Jose Mourinho says there is just one word to describe Luis Suarez – amazing, writes Tom Hopkinson in the Sunday People.

The Chelsea boss was fiercely critical of the Uruguayan at times last season and particularly the dark arts that are part of his game.

He even went as far as saying Suarez should not have been named player of the season and Edin Dzeko or another Manchester City player, as Premier League champions, should have won it instead.

But after watching Suarez tear England apart with two goals on Thursday , the Portuguese admitted there are two sides to the Liverpool striker’s character – and one of them he absolutely loves.

Mourinho said: “You know, I think there were two periods of Luis Suarez.

What do you guys think?
Collapse