It never rains but it pours...

According to the Guardian, Didier Deschamps has filed a civil suit against Anara Atanes for her tweeting after boyfriend was unsurprisingly not picked for France's World Cup squad. 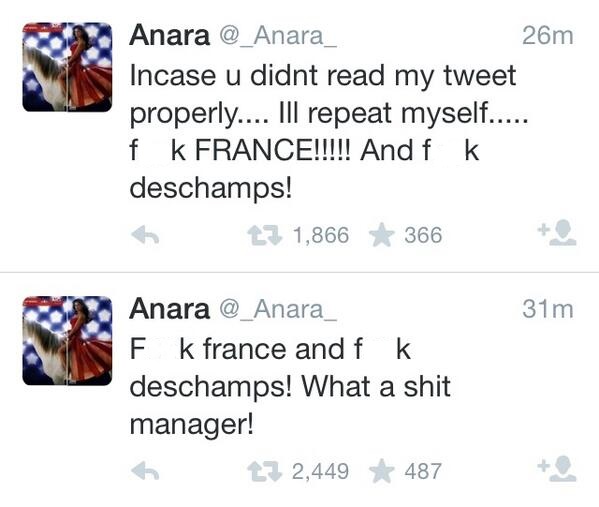 From the article, it appears the FFF is fully in on this foolishness:

Now French radio station RMC is reporting that Deschamps and the French Football Federation (FFF) have both opened legal proceedings against Atanes, who is an English-born singer from the pop group Fanfare.

"FFF condemns insulting remarks against Didier Deschamps and fully supports his coach in his approach," read a statement released on Friday.

"The unanimous feedback confirmed that the entire France condemned such remarks. FFF believes that the unanimous indignation is enough to condemn such behaviour." 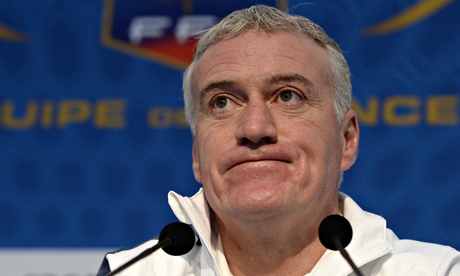 And in other, incidental hilarity:

In a press conference on Friday, Deschamps fielded questions about his squad's behaviour from some members of the media. However when it was pointed out to him that there was a brothel 500 metres from the squad's Brazilian base in Ribeirao Preto, the former France captain reacted angrily.

"Apparently, you're better informed than me," Deschamps said.

An addendum to the two posts lower down on

1. Nasri's girlfriend's hilarious twitter freak-out and
2. Deschamp and the FFF suing her for defamation of character

That comical bit about the hotel being too near a brothel during the rather testy press-conference Deschamps held earlier today? It doesn't worry Deschamps. There'll be no scandals. Because he claims he has files on the journalists who may have been...sampling some of the night-life in the same places where the French NT...you know...hang out.

The French NT: all sex, all the time.

The best part of his press conference was largely redacted by the Guardian but here it is via Dirty Tackle (who glosses it so beautifully):

But Deschamps isn't limiting his pre-World Cup retribution to Atanes. Upon mentioning that there is a brothel just 500 meters away from France's base camp in Ribeirao Preto — a notable concern given the underage prostitution scandal that two members of the squad (Franck Ribery and Kerim Benzema) were tied up in until earlier this year — Deschamps made it clear that he's watching the watchers.


"Apparently, you're better informed than me," Deschamps told monde.fr. "It's bizarre, because you must frequent the same places as the players. When we went to play in Ukraine, I also know the media's evenings were quite animated.

"Curiously, you go to the same places, but that is less well-known. Often, I find out about it all the same. Just in case. Because you might have files on the players, but I also have them on you. It's good to know what's going on. After that, each person does what they want."

Remember: we're still weeks away from the start of the tournament. At this rate, the team's staff and players will all murder each other on the flight to Brazil and Deschamps will emerge from the plane holding the severed head of a French journalist before formally forfeiting all of their group stage matches.

If my NT (Germany) doesn't win this fucking competition then France is welcome to do it. Or crash out early. Or hijack their own flight on the way across the Atlantic and force the pilot to return to Paris.

I love you, France NT.