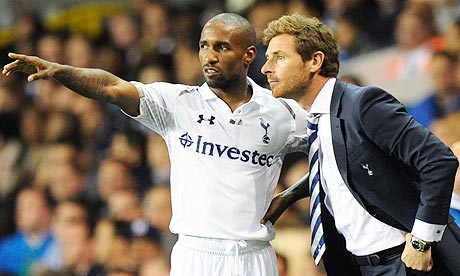 Uefa should threaten to make Lazio play their next Europa League game behind closed doors if their fans are found guilty of making monkey chants, the leading anti-racism campaigner Piara Powar has said.

Tottenham Hotspur's Aaron Lennon, Jermain Defoe and Andros Townsend were the subject of racist chanting during Thursday night's 0-0 draw against the Italian side at White Hart Lane.

Uefa, whose president, Michel Platini, was at the game, is awaiting reports from the match delegate and the referee Ovidiu Alin Hategan before deciding to take action against Lazio.

Members of the anti-discrimination group Football Against Racism in Europe (Fare) who were in the crowd at the north London ground said they heard monkey chanting and they are now filing their reports to Uefa to help it with any potential disciplinary action.

Powar, the group's executive director, thinks European football's governing body need to issue a tough punishment on Lazio to send a strong message to the club that racism will not be tolerated.

He said: "Uefa normally operate a 'three strikes and you're out' policy, and I think Lazio are at first base in that respect, but if [Uefa] really want to set the bar high, if they really want to send out a strong message, then I think they can do so regardless of whether it's a first or second offence.

"I therefore think that Uefa could move directly to something like a match behind closed doors [punishment]. They could suspend that punishment, perhaps, and then if something happens further down the line, then they can trigger that.

"Lazio are a strong club. They have been part of the European football scene for a long time. There needs to be quite a hard symbolic action taken when these instances occur. This punishment is one way of waking the club and the fans up to some of the problems that they face."