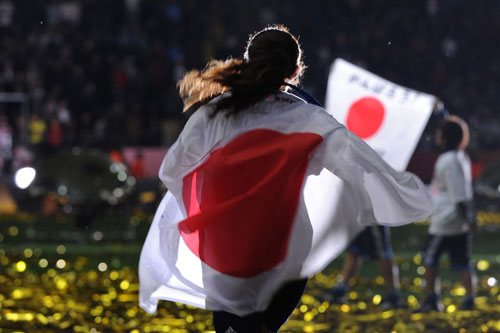 As she was leaving the pitch on Aug. 9, in perhaps her last game with the Japanese women's national team, Homare Sawa's eyes filled with tears and she had to look to the sky to keep the tears from falling. 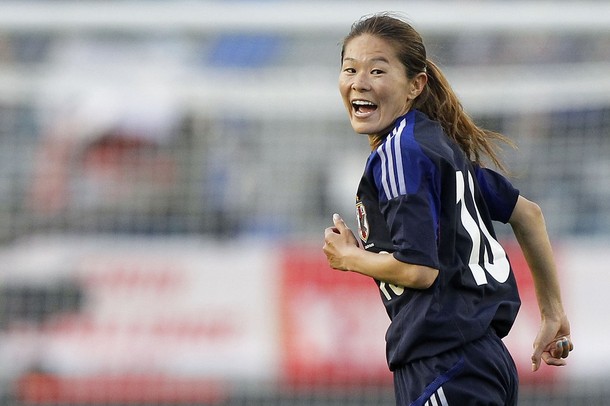 oh btw, i think they did score that flight upgrade especially with the men coming up empty...

Christine Sinclair is picked to carry the Maple Leaf at the closing ceremonies!

Actual comment overheard in the super-market yesterday: "Do we have a men's team like the one with Christine Sinclair?" *

Canada, the summer Olympics perennial no-hoper, has just won its first team medal in a traditional team sport since Berlin in 1936 when the Canadian men's basketball team brought home the silver. The women's football team won bronze this week and the women of the national team are once again the subject of considerable affection. Their achievement has made Sinclair (already something of a national heroine after her broken-nose-free-kick-scoring-heroics made every front page last summer) the obvious choice to carry the flag.

True to form, they are all hoping "girls around the country get off the sofa, put on their cleats, and kick a ball around outside!" to quote their coach.

Beyond adorable YouTube video is here - it won't embed, which is why I'm linking away!

LINK TO ARTICLE IN THE GLOBE AND MAIL

Speaking as an immigrant to the place for a moment: Canadians are quite lovably incorrigible flag enthusiasts! As such greatly adored figures in Canadian sport - Wayne Gretzky, Katrina Lemay Doan, Joannie Rochette, Cindy Klassen and Clara Hughes - are typical examples of people who are picked to carry the flag.

*Yeah we do. But they kinda-sorta suck, the poor darlings.