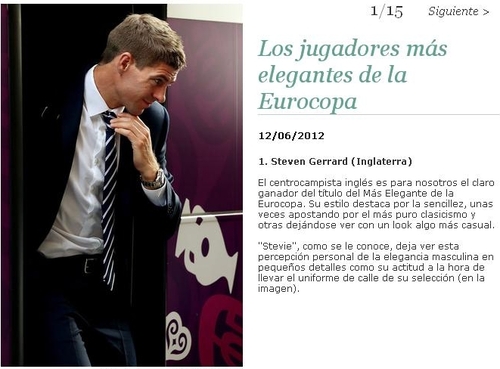 According to google translate:

1. Steven Gerrard (England)
England midfielder for us is the clear winner of the Most Elegant title of the tournament. His style is notable for the simplicity, sometimes betting on the purest classicism and letting others do with a more casual look. "Stevie", as he is known, shows that personal perception of masculine elegance in small details like your attitude when street wearing the uniform of your choice (pictured).

Arsenal striker Robin van Persie has announced that he will not be signing a new deal at the club.
The 28-year-old, who has a year left on his current contract, confirmed that he had met with manager Arsene Wenger and chief executive Ivan Gazidis.
But he revealed that they disagree on the way the club should move forward.
"I've thought long and hard about it, but I have decided not to extend my contract," the Dutchman wrote on his personal website.

here's a link to his blog about the situation

Both the UEFA EURO 2012 and OFC Nations Cup have clearly left their mark on the current edition of the FIFA/Coca-Cola World Ranking.

Spain have managed to extend their lead significantly by defending their European title, while finalists Italy (6th, up 6) have also been richly rewarded for their performances in Poland and Ukraine with a return to the top ten. Defeated semi-finalists Portugal (5th, up 5) and Germany (2nd, up 1) have equally seen improvements in their positions, as have England (4th, up 2), Greece (12th, up 3), Czech Republic (18th, up 9) and hosts Poland (54th, up 8) and Ukraine (46th, up 6).

The Netherlands, on the other hand, have slipped down (8th, down 4), while Brazil (11th, down 6), currently sit in their lowest position since the start of the FIFA/Coca-Cola World Ranking.

Thanks to their surprising victory at the OFC Nations Cup, Eddy Etaeta’s Tahiti have made great progress, climbing 41 spots to currently occupy 138th and securing their spot in next year’s FIFA Confederations Cup in Brazil.

A total of 133 international 'A' matches have been played in recent weeks, made up of 31 EURO 2012 matches, 60 qualifiers for the 2014 FIFA World Cup Brazil™, 15 CAF Africa Cup of Nations qualifiers, and 27 friendlies.

All of these contests have clearly reshuffled the global ladder, with only 22 of the 208 ranked teams holding their position from the previous month, while 85 teams have moved up the table and 101 have dropped at least one place.


SOURCE
For those curious of the rankings are calculated, the lovely folks over at Reuteurs would like to help: 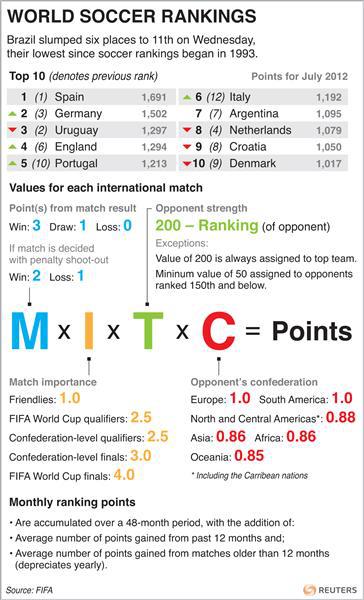 Still looks like FIFA is smoking something fun (it's been 16 years since England even made it to a semi-final), but it's still better than having the USA in 4th place like in 2006, tbh.
Collapse