sorry about last week guys. i was eating Korean and watching Larry the Cable Guy build a castle...

Following last week’s preview, the Oranje technical sponsor Nike has unveiled the Netherlands EURO 2012 away kit. It will be Holland’s road uniform during the 2012/13 international season and will make its debut when the Dutch meet England in friendly action on February 29th at Wembley. 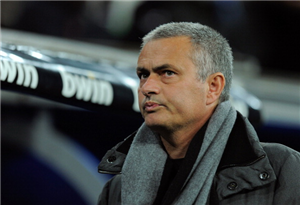 Real Madrid coach Jose Mourinho has been accused of making a homophobic slur prior to Tuesday's Champions League game away to CSKA Moscow.

Mourinho is alleged to have called match officials "faggots" prior to the 1-1 draw in Moscow.

The European Gay and Lesbian Sports Federation (EGLSF) has filed a complaint against the Special One, while co-president Louise Englefield has urged UEFA to take action against the former Chelsea and Inter Milan boss.

"Homophobia is unacceptable from anyone in football, much less from one of the game's most senior figures," Englefield was quoted by the Daily Mail as saying.

"We are deeply disappointed that Mr. Mourinho is casually using homophobic terms of abuse in his workplace.

"It is especially sad that these comments have been made during the International Football v Homophobia campaign week.

"As long-standing partners of the FARE network, we call on UEFA to take action and impose appropriate sanctions."


at last there is a reason for my hatred of him that isn't "but i hate all the teams he coaches/he's an asshole, really"
Collapse