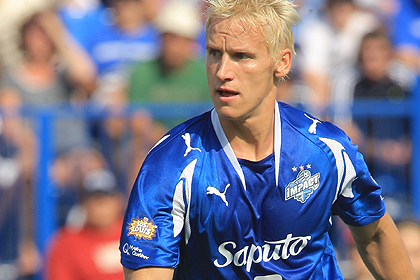 David Testo made headlines earlier this month when he came out publicly as gay, the first North American professional soccer player to do so openly. A onetime team MVP for the Montreal Impact, Testo was released by the new MLS club recently and is dealing with his new public identity and the ramifications it might have on his professional career.

He spoke with MLSsoccer.com's Nick Firchau about his decision, his days with the Columbus Crew and why he turned down a chance to return to Major League Soccer before he came out.

MLSsoccer.com: More than a week after your announcement, have you been surprised by the public reaction? It doesn’t seem like there’s been a great deal of controversy or backlash about your coming out.
Testo: When I did the interview [on CBC], I didn’t think it would have the echo that it’s had. I’ve been living in Montreal for the past five years, and I live in kind of a bubble in these terms, so when the interview had the ripple effect that it did, I was kind of in shock. But then I started getting nothing but positive feedback and congratulations, and lots and love and support. It’s been pretty awesome to see that people are so supporting, accepting and moving in the right direction.

When I gave the interview, I didn’t tell anyone. So when all of this happened, I started getting calls from my mom asking me, "What the hell have you done?" because reporters were calling my house in Nashville. I couldn’t believe it had gotten there already. I didn’t even think twice to tell anyone or forewarn anyone.
( Collapse )

I think this is a really important interview. I hope he finds a club to play for.

Source: Dirty Tackle (EDIT: the fragment below was published/written on DT)

"Look at the letter I received from three beautiful fans. The letter is 1 km. Thank you for caring," said Neymar on Twitter, providing the image above as evidence of such a ridiculous item.

Because it's all rolled up, we have no way of knowing what the letter says. But judging by the looks of that behemoth, it must be amazing/terrifying/hilarious/even more terrifying. Especially when you realize the whole thing was written in bodily fluids.

If Neymar hasn't hired an army of personal bodyguards yet, now would probably be a great time to do that.

I'm guessing he celebrated by doing this again: