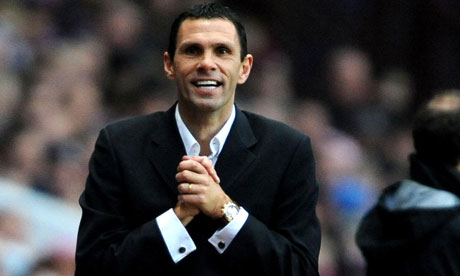 Patrice Evra, the Manchester United defender at the centre of the Luis Suárez racism case, has been accused of overreacting and "crying like a baby" in an astonishing attack by Gus Poyet, a friend of the Liverpool striker.

Poyet's condemnation flies in the face of the Kick It Out campaign's instruction for footballers to report anything they consider to be racial slurs. But the Brighton manager believes Suárez has been harshly treated and his dismay about his fellow Uruguayan being charged by the Football Association manifested itself in an outburst about the behaviour of the alleged victim.

"I believe Luis Suárez, it's simple," Poyet said. "I played football for seven years in Spain and was called everything because I was from South America, and I never went out crying like a baby, like Patrice Evra, saying that someone had said something to me."

jw, does victim-blaming earn fa sanctions, or are those reserved for players who swear and managers who criticize referees?

EDIT: On the other hand, David Beckham thinks this shit is appalling.
Collapse