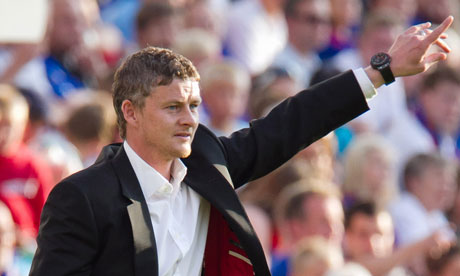 Ole Gunnar Solskjær has guided Mølde FK to their first Norwegian league title in his first season in charge. Solskjær's team drew 2-2 with Strømsgodset while Rosenborg – the only side who could stop them – were thrashed 6-3 at home by Brann.

"The club has waited 100 years for this," said the former Manchester United striker who played for Mølde before spending 11 years at Old Trafford.
"We have been close several times so this was well deserved. When Brann went 4-1 I realised we had done it. It was a good atmosphere in the dressing room and we will enjoy ourselves tonight."

Mølde, who have an eight-point advantage at the top with two matches to play, almost threw away the chance to end the title race when they conceded a last-minute equaliser to Strømsgodset's Anders Konradsen. Magnus Eikrem, Manchester United former player, also scored the second goal for Mølde.

Mølde was founded on 19 June 1911. They are Norwegian Cup winners two time and the highlight of the history of the club, so far, is however the participation in the UEFA Champions League in the 1999/2000-season.

The 38-year-old took over at the club in November after a spell with United's reserve team. During his two and a half years as reserve coach, United was champions of England, champions of the northern league and won as well the Manchester and Lancashire Senior Cups.

sauce
-
Congratulations to Mølde and Ole!
your favs could never. bows down mortals.