David de Gea might earn £35,000 a week but that didn't stop the Manchester United keeper allegedly stealing a £1.19 doughnut from Tesco.

The Spaniard waltzed into the store in Atrincham, Greater Manchester with two friends before wolfing down the tasty treat, it is being claimed.

De Gea apparently tried to make a speedy exit but was spotted on CCTV and quizzed by security staff - one of whom spoke Spanish.

They left the star in no doubt that he had made a howler but stopped short of taking any further action or calling the police.

'The security guards who monitor the CCTV watched two of them take a doughnut each out of the Krispy Kreme cabinet,' a source claimed in The Sun.

'They weren’t very subtle. They swaggered in chatting loudly in Spanish.

'Incredibly, they then appeared to try to leave without paying — or buying anything else for that matter.'

The source said that when challenged and ushered into the search room, de Gea did not seem to know what was going on and 'looked pretty embarrassed'.

A Tesco spokesman said: 'A customer was spoken to by our security team and the issue was resolved.'

Mancini's son has done a Tevez 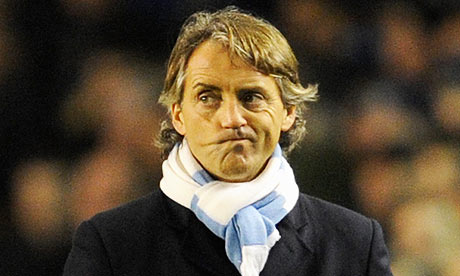 The Manchester City boss will be left red-faced now the Mirror has revealed 20-year-old Filippo Mancini reacted angrily when told to go on after 80 minutes of the match just six weeks ago.

When the manager of City’s Elite Development Squad Andy Welsh asked him to replace another player, Filippo refused.

Witnesses of the incident at Hyde’s Ewen Fields ground in east Manchester said Filippo swore at Welsh before storming off.

Instead of leaving with the rest of the squad after the match, Filippo is believed to have been driven away from the stadium in a taxi.

A City spokesman admitted the incident had taken place but stressed that Roberto had not been told about it until Friday.

Mancini will be mortified by the revelations, which have emerged just three days after the City boss told Carlos Tevez he would never play for the club again after accusing him of an identical offence.