Arsenal announces today that they have reached an agreement in principle with Barcelona for Cesc Fabregas to move to Spain.

-pleading with his captors to release him unharmed. 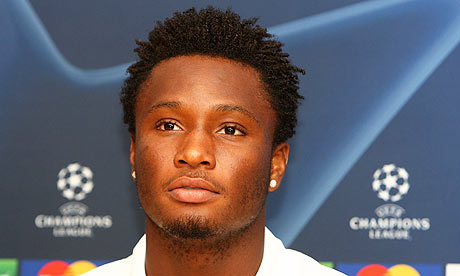 Michael Obi failed to return to his home in the city of Jos, in the country’s Plateau province, on Friday evening. In an interview with Sky Sports News on Monday, Mikel confirmed he has not been seen since then, with calls to his mobile phone also unanswered.

The LA Galaxy today agreed to terms with Ireland National Team captain Robbie Keane. Keane, who will join the club from Tottenham Hotspur of England’s Premier League, will officially be added to the club’s roster upon receipt of his P-1 Visa. A proven goalscorer, Keane has scored more than 250 goals for club and country in a career that began in 1997 at the age of just 17 and has seen him become one of the all-time leading goal scorers in the history of the Premier League. Per team and league regulations, details of the contract were not released.

As the Galaxy currently have three designated players, the club will have to make a change prior to their adding Keane, 31, to the roster.

“I am delighted, honored and very excited to be joining the LA Galaxy,” Keane said. “I have always wanted to come and play in MLS so it’s the perfect combination for me and a dream come true. My family and I have already been made to feel very welcome in telephone calls from Tim Leiweke and Bruce Arena. Also when David Beckham came and trained at Spurs recently he couldn't speak highly enough about the Galaxy, their fans and the league in general, so I can’t wait to get over and get started.”

A native of Dublin, Keane has made 108 career appearances for his country, scoring 51 goals to make him Ireland’s all-time leading goal scorer. A member of Ireland’s squad at the 2002 FIFA World Cup, Keane scored three times in four games at the tournament. Prior to joining the senior national team, Keane helped Ireland win the 1998 UEFA U-16 European Championship and the UEFA U-18 European Championship that same year. Ireland are currently tied for first place in Group B of qualifying for the 2012 European Championship, with Keane scoring five goals in six matches.

“Robbie Keane will be a great addition to our club. I have followed his career and have always respected his ability as a competitor and a goalscorer,” Galaxy General Manager and Head Coach Bruce Arena said. “I believe that he brings qualities in and around the penalty area that we have been lacking. Hopefully, he will be another piece of the puzzle in our quest for the Supporters’ Shield and an MLS Cup championship as well as to advance to the next round of the CONCACAF Champions League.”

i hope he has the best of luck with LA! in b4 childhood team

Theo Walcott has lifted the lid on life in the England camp under Fabio Capello and revealed a regime ruled by fear in which the Italian has made players cry, thrown things at them during dinner and ignored agreements with clubs to release injured stars.

The Arsenal winger was the surprise exclusion from the World Cup squad last year - four years after being Sven-Goran Eriksson's shock inclusion - and admitted that manner of the shun had left him angry, numb and confused.