Eric F'ing Cantona: "When I was in Manchester, I loved the city and had a great time." 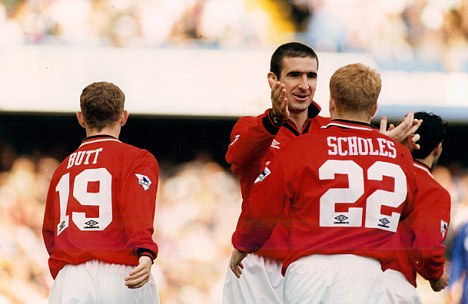 But he has also warned Roberto Mancini’s title hopefuls that United will continue to dominate – even without the retired Paul Scholes.

The French legend has returned to his spiritual home to help celebrate Scholes’ testimonial against New York Cosmos tomorrow night, where the director will manage a dream Cosmos team including Fabio Cannavaro, Gary Neville, and Patrick Vieira.

And after hearing that Mario Balotelli this week joined Carlos Tevez in insisting he has struggled to settle in Manchester, Cantona says success on the pitch is what’s important.

“They don’t like the place?” he asked. “It depends where you come from. If they come from Milan, maybe."

“I don’t want to name other cities, but if their city is better, then why did they come?"