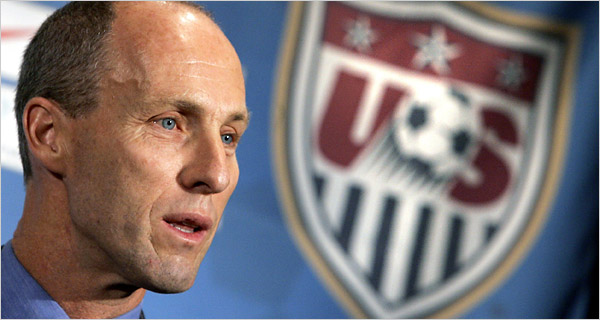 No immediate replacement was named.

After the United States reached the second round of the 2010 World Cup in South Africa, Bradley’s contract was extended through the 2014 World Cup in Brazil. But the Americans were routed, 4-0, by Spain in a friendly in June, then were swamped, 4-2, by Mexico in the Concacaf Gold Cup final.

Fairly or unfairly, frequent criticisms of Bradley began to resurface: he was too conservative, favored players like his son Michael, did not develop a sufficiently creative attacking style, and coached a team that often fell behind early and had to catch up using fitness and determination rather than technical skill.

Bradley achieved some impressive results while building a 43-25-12 record since 2007, including a defeat of top-ranked Spain at the 2009 Confederations Cup, where the Americans finished second to Brazil, and finishing atop group play at the 2010 World Cup. Still, there was a sense of underachievement about the World Cup, given the favorable draw for the United States, which departed with a sense of missed opportunity.

“We want to thank Bob Bradley for his service and dedication to U.S. Soccer during the past five years,” Gulati said in a statement. “During his time as the head coach of our men’s national team, he led the team to a number of accomplishments, but we felt now was the right time for us to make a change. It is always hard to make these decisions, especially when it involves someone we respect as much as Bob. We wish him the best in his future endeavors.”

Before Bradley was hired in 2007, the United States sought to hire Jürgen Klinsmann, the former German star and national team coach, but Klinsmann turned down the job, saying he would not have been given what he considered sufficient control of the American team. He has since said that he might reconsider.

Bradley’s firing will ignite the debate about whether the United States team should be coached by an American or could flourish under a foreign coach. Some, like Bruce Arena, the former national team coach, have said an American coach is necessary to understand the American mentality.

"The American mentality?" gtfo. Football is football. Pia does not approve.

Coach Sergio Batista has paid the price for Argentina's unsuccessful 2011 Copa America campaign after having his contract canceled on Monday.

The Argentine Football Association has decided to combine the Top and National B Division of their football ladder to create one season-long, 40 round season.

Thirdly;
Romania friendly that was set for August 10th has been cancelled.