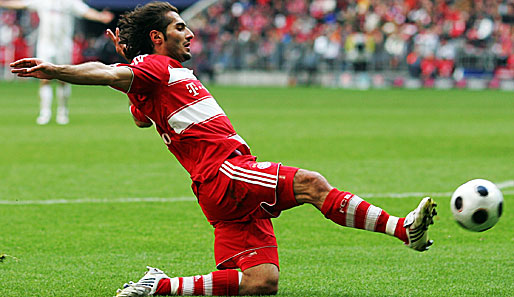 Lahm warns gays against coming out

Germany captain and Bayern Munich star Philipp Lahm has advised gay professional footballers against outing themselves, in an interview with German magazine Bunte. "For someone who does, it would be very difficult," the 27-year-old defender said. "An openly gay footballer would be exposed to abusive comments."

Brazil recall Fred but leave Kaká and Ronaldinho on the sidelines

The Fluminense striker Fred, who last played for Brazil at the 2007 Copa América, has been recalled by Mano Menezes on Thursday for friendlies at home to Holland and Romania in June.

There was no place in the 28-man squad, however, for the 2010 World Cup squad's playmaker Kaká or Ronaldinho.

"During the period of the Copa América Kaká will still need to do some activities related to his recovery so we concluded in a recent chat with him that it was still not the time for a call-up," the coach, Menezes, said.

Kaká has made a disappointing comeback from knee surgery for Real Madrid this year and not managed to reclaim a first-team place.

The former Lyon striker Fred has been in consistently good form since last season when he led Fluminense to the Brazilian championship title.

The midfielder Thiago Neves, who helped Flamengo win the Carioca state championship on 1 May, was also recalled to the squad for the matches against Holland in Goiania on 4 June and Romania in São Paulo three days later.

Brazil last met the Dutch in their 2010 World Cup quarter-final when they were defeated 2-1, while the São Paulo friendly will double as former World Cup-winning striker Ronaldo's farewell match.

Menezes, preparing Brazil for the Copa América in Argentina, is expected to pick the bulk of his squad for the July tournament from this group.

However, he still hopes Santos's Paulo Henrique Ganso will be fully fit after suffering a thigh injury earlier this month.

what do you think about his choices?
Pics from the Arsenal team dinner last night.

The exchange began when the fan, Liverpool supporter Sam Oldham, said, "Rooney ya fat whore ill smash ya head in with a pitchin wedge an bury ya with a ballast fork ya fat ugly lil nonse."

The England international responded, "haha you know were I train every day kid come and do it good luck.''

Oldham, whose account has since been deleted, then said, "and ill be down tomorrow lad in me twin turbo nissan micra."

Rooney replied, "I'll put u asleep within 10 seconds u little girl. Don't say stuff and not follow up on it. I'll be waiting."

The United star later played down the incident, tweeting, "Haha bit of banter and people go nuts chill all people."

This is why we can't have nice things.

The Football Association will abstain in the forthcoming Fifa presidential election because of doubts over the probity of Sepp Blatter and his challenger, Mohamed Bin Hammam.

The decision was made on Thursday after a majority of the board overruled Premier League voices in favour of supporting Bin Hamman’s challenge to Blatter.

Milan have had to bid adieu to star playmaker Andrea Pirlo after the Italian decided it was time to move on in his career and declined a renewal offer from the Rossoneri.
Pirlo who joined Milan in 2001 told reporters yesterday that his time with the league winners was done. He turns 32 today and the Rossoneri have paid him a tribute on their official website.

“For us, he’ll never be an opponent,” these words of team-mate Filippo Inzaghi and club CEO Adriano Galliani are used to commemorate Pirlo's time with the Rossoneri.

Pirlo also commented on his departure from Milan: "I am leaving after 10 unforgettable years. It's a consensual divorce, but I have not spoken with Juventus. I am here to say goodbye."

The Italian has won two Scudetti, two Champions Leagues, an Italian Cup as well as the Club World Cup during his time with Milan. He was also with the club during Italy's World Cup win in 2006.

It is generally thought around the peninsula that Pirlo will be joining Juventus in the coming summer. However, there have been reports linking him with a move to England in particular, Chelsea and Manchester City.

While Pirlo failed to renew his contract, two other veterans Filippo Inzaghi and Alessandro Nesta have both extended their tenures by a year each. The future of Clarence Seedorf is yet to be resolved.

Hadn't seen this posted on here, such a shame to see him leaving AC Milan, I always thought he'd retire there but good luck if he does go somewhere else this summer

GELSENKIRCHEN, Germany -- Victory comes in many guises and doesn't always depend on the result. One man's success is another man's failure, always measured against expectation. A Wednesday night in May and Manchester United had just reached the Champions League final. Despite resting a number of its most important players, United had defeated Schalke 04. Hammered it, in fact. But there were no recriminations and no complaints, no anger from the players in blue, no bitterness as to what could have been. There was success in their failure. This was the German club's first semifinal and these players never expected to get this far.

For one man in particular, this was a monumental moment. Raúl González Blanco said that reaching the final would have been the leche. The leche literally means the milk: incredible, brilliant, the business. Reaching the semifinal was the leche, too. Reaching it the way that he did, even more so. After the first leg, Raúl had swapped shirts with Ryan Giggs. For him, it was an "honor," he said; for Giggs, too. When the final whistle went at the end of the second leg, Raúl had possession. It was appropriate somehow. He bowed out of the Champions League, his competition, with the football at his feet.

Raúl had lost, but Raúl had won. He never expected to even be there. He never anticipated his farewell being so fitting -- at Old Trafford, scene of one of his team's greatest nights. There could have been more and there is still a chapter to be written but, until now Raúl had been arguably the story of this season's Champions League. He had won respect. He had won back his record. And, above all, he had won back his life.
You can read the rest here :

I wanted to post this first of all cause I really liked it, but also cause I think this is something that is so little discussed in the football world, seem to me like some players won't understand the value of playing at a club where they actually enjoy themselves until faced with the opposite. And of course, an excuse to show this man some love, for he deserves all of it!

(and I love how they make Schalke fans and Germans in general seems like the most respectful people in the world compare to the Spaniards ;)

It's our flawless, flawless goalkeeper's 29th birthday tomorrow, and he's just won Chelsea's Player of the Year at the end-of-season awards gala, deservedly. This man has amazing goalkeeping skills & a heart of gold!!~ LOVE HIM, so a spam to follow!

With another goalkeeper who is having his birthday tomorrow!~~~

Also, I was thinking about my XI of the season, and Petr would be my goalkeeper! The pinnacle of his epic this season was this: --

It was the West London derby on Valentine's Day (a date I shall always remember because I was hung up over this boy who I'd chilled with two days before; I measure my love life through football matches, trolololol. He needs to pray), Torres weren't scoring and this match had 0-0 written all over it. Then, David Luiz conceded a penalty in the last minute and I was distraught. Petr managed to save Clint Dempsey's penalty though, so at least we salvaged a point.  If you watch the gif, you see Cech flails a bit before Dempsey takes his penalty, before finally guessing right. Oh, god. Words cannot describe how much I love this man, he is the closest thing to flawless I have ever seen: outstanding goalkeeper, intelligent man, perfect husband, doting daddy. I LOVE HIM. Did you know he's never been drunk??!?!?! I love him so much, ksdfjjf!!! He nevar needs to train! (I know it's the consensus on here that "TROLOLOLOL Chelsea, piece of shit club with no history, all their players need slapping", but how anyone can dislike Cech is beyond me. He's a RL angel.

So following from that, I was wondering who you ladies/lads would have in your team of the season? ( Collapse )

What's your team of the season, y'all?~~