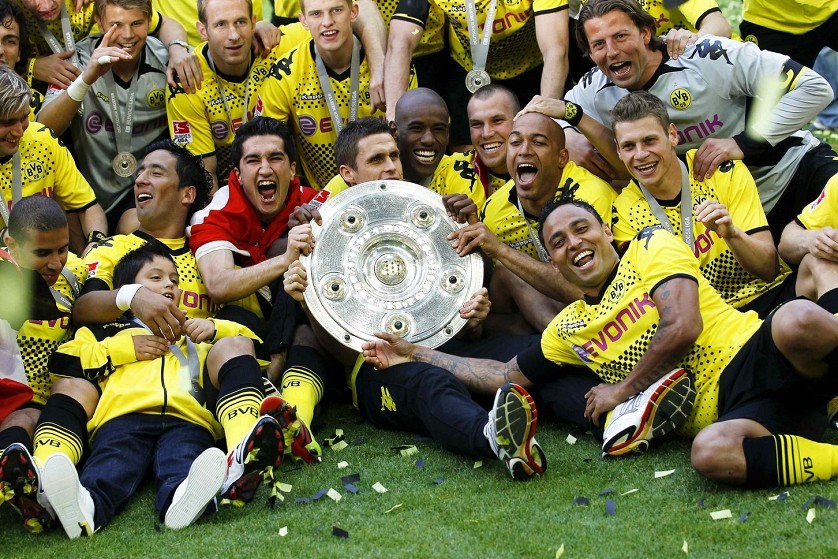 May 14th 2011 - after 9 years, the Meisterschale is back in Dortmund for the 7th time in the history of the club, Borussia Dortmund.


I'm glad no one drop the Meisterschale or try to use it as a frisbee. They're also having a charity match against the Japanese football team in about 2 hours. Hopefully they still remember how to play football.

no one didn't post these matches so uh, yeah


STREAMMMSS!!!!!
FootballStreaming//RojaDirecta//ATDHE
* let me know if i should add more matches

Daniel Agger is set to auction off a whole host of autographed football and sporting memorabilia next month at a charity gala to raise money for Danish soldiers who have been injured in Afghanistan.

The Liverpool defender will put up a collection of signed match-worn jerseys, boots and gloves from both current and former Reds, as well as other players within the game. Some of the items on offer include an Agger Liverpool shirt signed by the entire squad, Steven Gerrard's boots, Pepe Reina's gloves, a Brazil shirt worn by Lucas Leiva, and a replica 1986 FA Cup final jersey autographed by Kenny Dalglish. (IWANTALLOFITTBQH)

Flawless man is flawless. This is such a wonderful thing, I really wish I didn't live in the States or else I'd go tbqh

So I've come to notice a lot of people complaining about the refs this season in particular in the EPL. SOOOO I've decided to find out the facts about how the refs have called the games this season. By using THIS as my source, let us begin:

Aand there you have it.

Hello there. Some of you might remember Hannover 96 as last year's team of trauma - back in 09/10, when we lost all focus, all spirit, everything, and barely kept the league after we had to bury our beloved captain and goalkeeper Robert Enke. We've received much (most appreciated!) sympathy back then (I know it did help me), so I was thinking that maybe some of you might be interested in how we.... well, bounced back - from horror to more than we'd ever hoped for; from team of trauma to Bundesliga's surprise team of this season, actually.

We played the best season ever in 10/11, breaking club record after club record and finishing at rank 4 of Bundesliga, reaching one of those desired international spots after many years of absence from European football. Rank four equals a slot at next season play offs for Europa League, and we're all so very happy and excited! And 96 even made a little movie to say thanks and welcome Europe. Awwww!

(For non Germans, the gist is this: The first half repeats the message "Let's go to Europe" again and again. Then, there's a little cut, dramatic music and a press conference, with coach Slomka being all serious and saying that this message is wrong... *drumroll* and it should rather be "Europe is coming to us!" LOL.)

Needless to say, we celebrated this season ending like woah, all complete with beer showers, singing coach, two huge team presentations with lots of silliness and laughter and a very drunk captain. It was terrific. ( Collapse )

Some sort of P.S.: Also, I'm proud to say we're quite a clever little team, for we made good use of a loophole in what must be the most stupid football rule ever. I'm talking about players who get yellow carded when they take their jersey off. But well, did you know: Getting rid of your shorts doesn't have any consequences at all! ( Collapse )

What about you, bbs? Who've scored your goals in matches against the top four, and how about the bottom three? And, disregarding goals, who do you think always brings it in big games?

We are happy to announce that from now on you can buy Red Card Homophobia shirts, tote bags, stickers etc. (:
Right now the money goes to the store but hopefuly later we'll figure a way to make it that some of the money goes to RCH. So go and buy a RCH shirt for you dog and be the coolest kid on the block. :D

Mods, hope this is OK.

Now I have your attention ...

If you would like more of this, and really who wouldn't want more suited Vida?, then you need to tune in and watch Utd's Player of the Year Awards Ceremony when it kicks off at 19:30BST (20:30CEST/14:30EDT)

Hopefully this post will be as awesome as the last couple of years' Awards posts have been and we'll have lots of (hot, suited) pics and commentary from the awards - as well as all the backstage action.

The Awards are broadcast live on MUTV if you have it, but if not there is already a stream available here and I am sure there will be more available during the evening.
Collapse