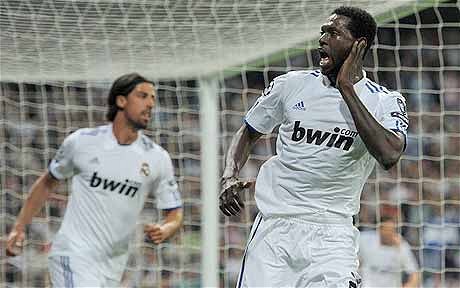 Tottenham Hotspur appear unlikely to face a UEFA charge over chants aimed at Emmanuel Adebayor by their supporters after the incident was not included in the official match reports.

Adebayor hit out at Spurs fans who allegedly hurled racist taunts at him during Real Madrid's 4-0 win over the Premier League side on Tuesday. Adebayor scored a brace in the Champions League quarter-final clash, taking the former Arsenal striker's tally against Spurs to ten goals in 13 games.

Tickets for Manchester United vs. Barcelona at FedEx Field on sale April 21

Tickets for the July 30 friendly between Manchester United and FC Barcelona at FedEx Field, the most anticipated match involving European clubs touring the United States this summer, will go on sale to the general public April 21 at 9 a.m. via Ticketmaster.

Prices will range from $40 to $175, according to Tony Wyllie, senior vice president for the Washington Redskins. The NFL team purchased the rights to the game and set the fees. Those prices do not include service charges, but do include parking at no additional cost.

Initally, sources told the Insider, the Redskins were planning to charge $65 for the cheapest seat in the upper deck and between $105 and $230 in the lower sections. However, those rates apparently were adjusted. The specific pricing manifest for the match at the 91,704-seat venue in Landover, Md., hasn’t been completed, Wyllie said.

Although the match is not being held at RFK Stadium, D.C. United’s season ticket holders will have access with their Special Game C ticket. The club will contact those fans to provide seat location and new tickets. Redskins suite and premium season ticket holders have the right of first refusal to their seats.

If you are going and want to plan a meet-up join here: http://community.livejournal.com/clfmeetup/1746.html

And since I'm here if you're planning on going to USA/Spain the meet-up post is here: http://community.livejournal.com/clfmeetup/2388.html

Just request to join, it's locked because it's a meet-up comm and well, you don't want people lurking on that kind of stuff. 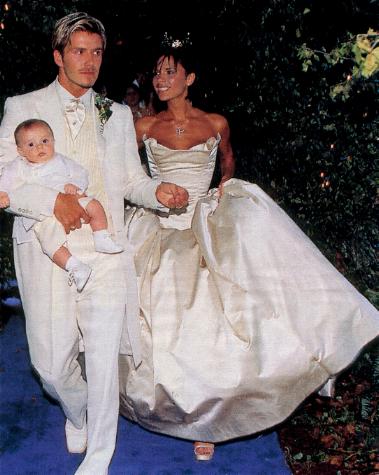 As I am sure you are all aware the Beckhams are expecting a new addition to their family. A baby girl! According to Pop Crush, D & V asked their three boys, Brooklyn, Romeo and Cruz for suggestions on what to name their baby girl. Romeo suggested Justin Bieber. Dave thinks it should be changed to Justine since they know they are having a girl.

eh, I vote no on Justine. What are your suggestions for the Beckham clan, ONTDFB?

Gary Neville has signed for Sky Sports, the former England and Manchester United defender will join the Sky Sports team from the start of the 2011-12 season.

Neville, 36, is well-placed to co-commentate and give his expert opinion on UEFA Champions League, Barclays Premier League, Carling Cup and future international fixtures and he is looking forward to the fresh challenge.
"I am thrilled to be joining Sky Sports," said Neville, who won 15 major trophies over a career spanning almost two decades.

"It has always been leading the way in football coverage. Now I have retired this feels like the perfect way for me to stay involved in football and I am looking forward to bringing my 19 years of match experience into television."

Neville spent his entire playing career with Manchester United and in 602 appearances for the club, won the UEFA Champions League, eight Premier League titles, three FA Cups, two League Cups and the UEFA Cup Winners Cup. He is also the most-capped right-back for England with 85 international caps to his name.

"He will give our viewers great insight when he joins our team next season working on Barclays Premier League, UEFA Champions League and Carling Cup football next season."

Described by Sir Alex Ferguson as "the best right-back of his generation", Neville was part of the United squad which won the FA Youth Cup in 1992 alongside David Beckham, Ryan Giggs, Nicky Butt and Paul Scholes.

Neville's most recent appearance in the Sky Sports studio was at Millennium Stadium for the UEFA Euro 2012 Qualifier between Wales and England on 26 March 2011.

So, I can't wait for him and Jamie "did you know my best mate's Frank Lampard" Redknapp to be co-pundits :D 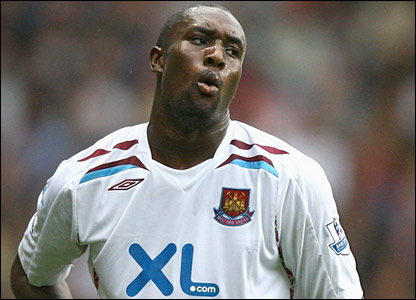 Carlton Cole has been charged by the Football Association with improper conduct over comments he made on Twitter about Ghana fans during the recent friendly against England. The West Ham striker referred to the large numbers of Ghana fans at Wembley Stadium in comments he later deleted.

He tweeted: "Immigration has surrounded the Wembley premises! I knew it was a trap! Hahahaha. The only way to get out safely is to wear an England jersey and paint your face w/ the St. George's flag!"

The FA today confirmed the charge, saying in a statement: "The FA has charged West Ham United's Carlton Cole with improper conduct relating to media comments. The charge relates to comments made on Twitter during the England v Ghana fixture on 29 March 2011."

Cole, 27, who claimed his comments were a joke, has until 4pm on 13 April to respond to the charge.

Lord Herman Ouseley, head of Kick It Out, football's equality and inclusion campaign, said apparently harmless comments could cause offence. "We continually urge the responsible use of mediums such as Twitter, particularly due to their increasing accessibility and popularity," he said. "What can seem like harmless comments can be deemed offensive by others and lead to unwittingly reinforcing negative stereotyping, including racist ones. We will work with all our partners to ensure that education on what is and isn't unacceptable behaviour, is ongoing."

I tried to resist but i couldn't help myself XD
here's a picspam of my fav defender for you...this guy drives me crazy *lol* Kenny Dalglish today confirmed Steven Gerrard will miss the rest of the season. The Liverpool captain underwent surgery on a groin problem last month, but suffered a setback in training last week and subsequently missed Saturday's clash with West Brom.