By Daniel Alvarenga and Shrikesh Laxmidas

LISBON - FIFA has threatened to suspend Portugal's national sides and clubs from international competition should the country's federation fail to approve new statutes that conform with the world soccer body's rules. The Portuguese Football Federation hopes it will pass the statutes in a vote on March 19, after its regional associations rejected them in previous assemblies because they feared losing influence at national level."Should that not be the case, the Associations Committee would refer the case to the FIFA Emergency Committee for possible sanctions, including suspension," FIFA's media office said via email on Friday.

Benfica’s left-winger Fábio Coentrão was voted February Player of the Month of the national championship. The “reds’” number 18 will receive the award before the start of the home match against Portimonense scheduled for next March 13. After being elected Footballer of the Year at Benfica’s 107th Anniversary Gala and having recently received the award for Young Player of the Month of September 2010 by the Football Players Syndicate, Fábio Coentrão collects yet another award.

In the aftermath of the “reds’” defeat in Braga, Sport Lisboa e Benfica’s coach started by commenting on Javi García’s sending-off. “It was not because we were down to ten players that Braga showed superiority. It’s true that Javi’s sending-off was crucial, since that moment originates both Javi’s exclusion and Braga’s equalizer, but I must say that Braga’s bench was responsible for Javi’s sending-off, just like it happened last year with Di Maria”, he warned, analyzing the “arsenalists” attitude facing his team. 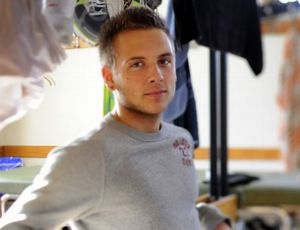 The 20-year-old, who plays in the Swedish Division 2 as left-back for Utsiktens BK, who are coached by his father Glenn, comes from a footballing family with his older brothers Tobias and Alexander both playing professionally too. Anton also had a promissory start in Häcken, a first league team, but had injury’s problems and left the team. He made the announcement in a magazine interview.

Hysen revealed that he came out to try and show that being a gay footballer is no big deal.

"I might not play in the top league, but I want to prove that there is no big deal if I'm a footballer and also gay," he told Offside magazine.

"I am a footballer. And gay. If I perform as a footballer, then I do not think it matters if I like girls or boys."

Hysen admits that some people might have a problem with his decision.

Hysen admitted that his announcement could affect his career, but added: "People may call me anything they want, it will just make me even more psyched."

"It's totally sick when you think about it," Hysen said about the lack of openly gay footballers.

"Hopefully more people will have the courage to come out now after his brave decision."

"If my brother’s reaction is positive, then others footballers would do the same" – Hysen said

Anton's father Glenn joined Liverpool in 1989, and helped the Reds to their 18th league title in his first season. He left the Merseyside giants in 1992.

Hysen senior told the magazine he was pleased his son had decided to come out.

: )  very brave attitude from the boy

The FA are to approach FIFA with a plea to end the confusion over Wayne Rooney-type escapes from justice — and press to be allowed to bring charges in future.

Senior officials have been stung into demanding clarification of the rules on retrospective action after bearing the brunt of the blame for Rooney avoiding a ban, even though video evidence showed the Manchester United and England star elbowing Wigan’s James McCarthy.
( Collapse )

Also, on the topic of FIFA:
FIFA tell Toure he should have had diet pill checked by doctors

Kolo Toure’s hopes of escaping a ban have receded after FIFA general secretary Jerome Valcke said ignorance will not be accepted as an excuse for failing a drugs test.

UEFA has charged Arsenal manager Arsene Wenger and midfielder Samir Nasri regarding comments towards the referee in the defeat by Barcelona.

Arsenal's Champions League hopes were dashed on Tuesday evening after Barcelona won 3-1 at Camp Nou to record a 4-3 aggregate victory.

However, the match was overshadowed by the second-half dismissal of Robin van Persie after the striker was penalised for time-wasting. Swiss official Massimo Busacca showed Van Persie a second yellow card for shooting at goal just a second after he had blown the whistle for an offside decision.

At the final whistle, Wenger confronted Busacca and continued his exchange with the referee down the tunnel.

Speaking after the match, Wenger was critical of Busacca's decision and claimed it was 'embarrassing' that Van Persie had been sent off. Wenger also suggested Uefa's representatives at the game were 'shocked' by the red card, which came just minutes after Arsenal had equalised.

Uefa had been waiting for Busacca's report on the match before deciding whether Wenger would face any disciplinary action over the incident.

A charge of improper conduct has now been levelled at Wenger and France international Nasri regarding comments made to Busacca after the match.

I´m not surprised by the charge for Wenger but I´m surprised Samir´s getting charged and RvP isn´t .

Also RvP can´t challenge his red card because of UEFA´s rules so it still stands, however no word if ther will be retrospective charges for the Barcelona players who put their hands round Nasri and RvP´s throats