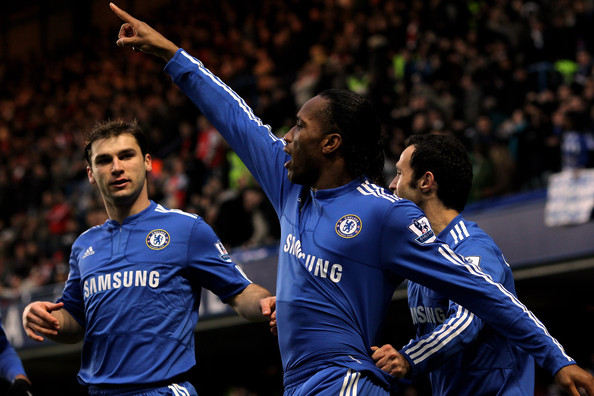 Drogba has not started the last three matches for Chelsea when Fernando Torres has been eligible, and with manager Carlo Ancelotti already stating that the £50 million Spaniard is the club’s future attention has focused on the reaction of the man he has replaced in the starting line-up.
( Collapse )
( Collapse )

(mods can we get a Howedes tag please?)

Ok, gloating is horrible, but there ever were a time when it was at least a bit al right it would be right now. If those who thought Arsenal would win against Barca could be written off as hopeless romantics - actually believing Schalke would win their DFB-Pokal semi-final against Bayern Munchen simply made you delusional.

( Collapse )all odds were against us. But when it's football, especially German football, who cares about the odds?

Schalke has won the game and will face 2nd divison team MSV Duisburg in Berlin on many 21 (even though Duisburg is just 30km away from Gelsenkirchen). But, we are not just celebrating a win - we are celebrating the fact we ACTUALLY played, we had a defence going on, we learnt how to work the other team's playing style to our advantage and how to overcome our weaknesses. It wasn't the best game, but it was a hell of a lot better than what we've seen from them in a too long time. The 40-year-old has been suffering severe back pain and was taken to hospital after last night's 1-0 league victory at Valencia that left the Catalans 10 points at the top of the table.

Despite deciding to attend the match with acute discomfort in his lower back, there are now doubts over whether he will be able to make it to the touchline for the second leg with the Gunners.

Guardiola’s No 2 Tito Vilanova said: ‘Pep is not feeling great and he got through the match as best he could. He is having a bad time of it and he doesn’t even know where to put himself.’

Guardiola had to cancel a press conference on Tuesday because of his back problems.

Barcelona face struggling Real Zaragoza at home on Saturday before meeting Arsenal three days later looking to overturn a 2-1 first leg defeat and knock the Londoners out of the tournament for the second successive year.

Also from Twitter: Barca have confirmed Pep Guardiola has a herniated disc, no word yet on whether he'll have an operation.

The charge relates to comments made about match official Martin Atkinson in post-match interviews following Manchester United’s fixture with Chelsea at Stamford Bridge on Tuesday 1 March 2011.

Ferguson has until 4pm on Tuesday 8 March to respond to the charge.
Source

The investigation is because of this post match comment to MUTV: "You hope you get a really strong referee in games like this. It was a major game for both clubs and you want a fair referee, you know ... You want a strong referee, anyway, and we didn't get that. I don't know why he's got the game. I must say that, when I saw who was refereeing it, I feared the worst."

Whilst he shouldn't have said what he did, it was not unreasonable of Ferguson to question why Atkinson was appointed considering the controversy last time he reffed a game between Utd and Chelsea and he was bound to end up on the wrong side of the FA.

Also if he is found guilty of the charges, whatever punishment he gets will be increased by a 2 game ban which was part of a suspended sentence handed out by the FA from when he hit out at Alan Wiley's fitness to be a PL referee in 2009

Seleção called up for the friendly against Scotland

Manchester City confirm that the FA has informed Kolo Toure that an ‘A-sample’ provided by him has tested positive for a specified substance.

As result of this, he has been suspended from participating in all first team and non-first team matches pending the outcome of the legal process.

There will be no further comment from the football club at this stage.
Source

So Kolo failed a drugs test and has been suspended ... this could get interesting