This should give everyone a laugh :)

(sorry for the watermarked pic)

There is no official word from his camp but this is what a dutch site (which I google translated) had to say:

The two already have a 2 year old son, Seb. Klaas-Jan and Maddy have been together almost ten years and had their first son when they moved to Spain. Now, two years later, it is time for a second child.

Yay! bb Seb will have a little brother/sister he can give his little glares at lol

Add any other tags i missed if needed
source:www.showbiznewz.nl/artikel_13191_klaas-jan-huntelaar-wordt-opnieuw-vader.html

Salvador Cabañas, 30 year old Paraguayan and former Club America striker, is set to resume training on Thursday afternoon for the first time since he was shot in the head in January of last year.

The highly-rated striker was set to appear for the Albirroja in the World Cup, having played a massive part in their qualification campaign due to the injury of Roque Santa Cruz--going on to score the most goals in their entire campaign.

On January the 25th 2010, Cabañas was in a bar in Mexico with his wife in the early hours of the morning, when he was shot in the head at point-blank range--presumably during an argument over his footballing ability. The man believed to be responsible, "JJ", has since been apprehended. He was taken to a hospital in Argentina, where he made a remarkable recovery against all the odds. However despite hopes he would recover in time for the World Cup, the bullet could not be removed and doctors believed it was too dangerous for him to partake in the competition.

For various legal reasons he has been unable to return to his former club, and has instead resumed training with Club Libertad--one of the top sides in Paraguay.

"It's an honour to have him with us. We want to do everything we can to help him in his recovery," Libertad's Uruguayan coach Gregorio Perez said, adding it would also be a motivating factor for his squad.
"We're prepared to have him with us daily... It's important for his recovery to participate," Perez told Primero de Marzo radio.

There were hopes that Cabanas would play during some of the international friendlies after the World Cup, but this never materialised.

I feel dreadful for Salvador, ever since the shooting his life seems to have been taking repeated turns for the worse. First there was a charade over his contract/wages, and his doctors bills and taxes went unpaid while he was in hospital. I believe he is now officially a criminal in Mexico because of this, and cannot re-enter the country? There have also been several reports and court cases over his agent allegedly stealing money from him, too, although i'm not certain over how true this is. Either way, the last thing he wants to be involved in while recovering from such a horrific injury is drama over money, its great to hear some positive news! 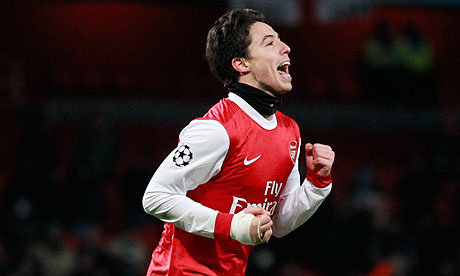 Arsenal's Samir Nasri is warm and happy in his snood.

Premier League players' taste for snoods could prove a short-lived fad after Fifa said it will discuss banning the neck-warmers. Snoods have become increasingly popular after Carlos Tevez and Emmanuel Adebayor started the trend last season, but they are not officially sanctioned kit.

thoughts on these proposals, ontd_fb?
lol I think keepers should at least be allowed to rock snoods

lookers, both of them 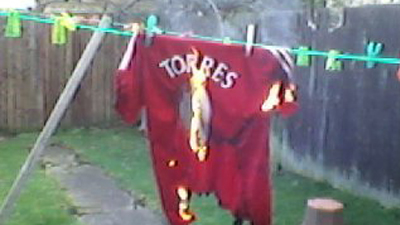 during the torres-related drama, someone on my twitter feed posted about afrikit, a charitable organization that sends football shirts to children in africa.

So who made the cut and who has been relegated to languishing in the Burn Book?
The players Del Bosque has called up to the Spanish National Team for the game against Columbia on the 9th of February are ...

Also, the list of players in the U21 squad for the game against Denmark on the 8th of February has been announced today by Luís Milla

Spain coach Vicente Del Bosque has been awarded the honorary title of Marquis by King Juan Carlos after guiding the national team to victory at the World Cup finals last year.

Stay classy Mr Fowler... :/ Personally I think this is ridiculous (the fact he feels the need to talk about it/wear a Liverpool shirt, even if it has Torres's name on it), then again, I also think it's ridiculous that he plays for Perth Glory *ahem* oh wait, he pretty much IS Perth Glory...

I just noticed that the article doesn't explain (of course it doesn't) that The Shirts That Hurt was a thing where people wore their most hated rival team's gear in the name of charity.

In his debut match as a player for the brazilian top team São Paulo, RIVALDO PROVES THERE'S NOTHING AS 'TOO OLD' WHEN IT COMES TO TALENT.

(only 'too fat', as we've seen with Ronaldo)

WARNING: Lots of reading. Induced frustration may cause an aneurysm


Morace to step down as CanWNT coach
( Collapse )

It's been speculated that this memo was leaked to cast a bad light on the CSA before they vote for governance reform on Saturday. So, for those who are curious this is what the CSA reform is about according to former CMNT captain Jason de Vos:

Change on the horizon for Canadian Soccer
( Collapse )

It's frustrating, as a Canadian national team supporter, to know that the only thing standing in our way is ourselves and the organization that is supposed to be helping us. Canada has the potential and the means to go further in football and this has gone on long enough, imo. The players, coaches and supporters deserve better.

Lastly, a lot of the exposure on the CSA reform and the Alberta Soccer Association (ASA) debacle should be credited to CanadianSoccerNews.com. Without the writers and editors of the site, this issue would have gone under the radar to the public. They have done a phenomenal job in terms of asking the right questions to the right people.

Tomorrow the vote for CSA reform goes through, follow it on twitter #CSAreform, tweet your support to two delegates who will be there and casting their votes for reform, @jasondevos and @karalang15. More twitter info here.


UPDATE: The CSA unanimously voted for reform in 2012 with all Provincial Presidents gradually out of the BoD by 2015. oooh yeaah \m/