Some further displays of vile sexism from Gray and Keys.

Yesterday a curtain jail-bait you ARE going to be hearing about in the coming years scored his first senior goal for Schalke. It was on the 118 minute of a  true nail-baiter game against their good friends from Nurnberg.

Basically, the miners had every excuse to lose this game: Hunteelar wasn't even named for the squad due to the injury, Jurado was on the bench and it was uncertain whether he will be able to play at all and our RB is off winning the Asian Cup or something else of ill-importance. But, this is bundesliga and so everything is possible and we fucking did it!

So lets all get our blau und weiss clothes out and celebrate like Royals.

Messi fined for wishing his mother a happy birthday

Once Lionel Messi converted his penalty in Barcelona's 3-0 win over Racing Santander on Saturday, he pulled up his shirt to reveal a message scrawled across his undershirt. It wished his mami a happy birthday for all the cameras to see. A nice gesture from a grateful child to the woman who carried him around inside her body for nine months before enduring labor and allowing the world to be graced with his abilities, but also one that the killjoys at the Spanish football federation felt compelled to punish because of their strict rules against shirt messages.

The referee did not book the Argentine forward for the celebration but mentioned the action in his match report.

The federation's disciplinary committee punished Messi under their article 91.1 for goal celebrations, which carries a fine of between 2000 and 3000 euros, and awarded him a yellow card.

To someone who makes as much as Messi does, a fine of a couple thousand euros is hardly worth caring about and probably something he knew would happen before doing it. Still, that money could have gone to more Legos.

After Canada beat Sweden 1-0 in the first match of the evening, the USA needed just a victory against China to tie Canada on points with six apiece and win the tournament based on its head-to-head win over the Canadians two days ago. As it turned out, the USA also finished with the best goal differential of any of the four teams at +2. Canada finished second, China third and Sweden, which defeated the USA in the opening game, but then lost two straight, ended in fourth. (read rest at source) 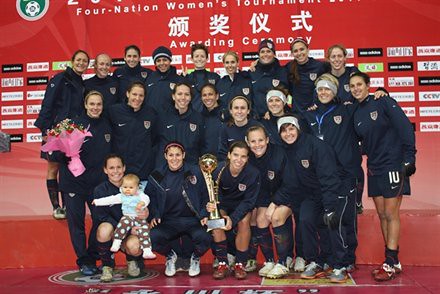