I shouldn't be here due to an exam period and both of my hands being in pain, but I had to share this. It made me lol so much.

So, Ancelotti went to see the Chelsea youth team playing and set in the stands. Well, at the end he found out that being the manager doesn't mean you can sit anywhere you want.

I can't even. That woman is fierce, lmao.

Cristiano Ronaldo is, on current form, undisputedly Real Madrid’s best player. Not only has the Portuguese scored 23 of his side’s 48 goals in this season’s La Liga, but his quality, hard work and will to win have made him a fans’ favourite for Los Blancos and set the benchmark for his team-mates to follow.

FIFA.com are borderline stanning in this article. lol.

Mark van Bommel (33) will transfer from FC Bayern to the Italian first division club AC Milan. The Dutch international had a contract with FC Bayern München to June 2011, but has asked to transfer because of sporting reasons (I assume this is because of conflicting opinions regarding play between Mark and LVG, please do correct me since my German isn't top notch). After a joint meeting this morning with the board, FC Bayern München AG, Karl-Heinz Rummenigge and Karl Hopfner, as well as sporting director Christian Nerlinger, have decided to approve of this request.

"It was Mark's request that he, for athletic reasons in his contract, immediately move to AC Milan. Mark was always very professional, a vastly important player for Bayern and also a great captain. Because of his contributions to the club we decided to approve of Mark's request," said chairman Karl-Heinz Rummenigge: "FC Bayern München wishes Mark van Bommel and his family all the best in Italy."

Mark van Bommel said: "I leave Bayern with a heavy heart, but with my head held high. I spent four and a half years here, four very beautiful and successful years and would like to express my gratitude to the club and to the fans. FC Bayern München will always occupy a large part of my heart."
sauce (in german so yall will have to deal with my shitty translation)
nvm english, also from the mothership

JEARS ;_; I DO BLAME THIS ON YOU RAIOLA

Sunderland is looking to bring in Michael Bradley to shore up its midfield and will be making a transfer bid for the American midfielder, Fox Soccer reported, citing “sources with knowledge of the deal.”

Bradley, 23, who has had a solid campaign for Bundesliga stragglers Borussia Moenchengladbach, has 18 months remaining on his contract in Germany. Gladbach turned down offers for the central midfielder after his strong performance at the World Cup in South Africa.

Bradley, the son of U.S. national team coach Bob Bradley, has been targeted to replace captain Lee Cattermole, who has drawn interest from Liverpool and has been slowed by a back injury. Paraguayan midfielder Victor Caceres, a World Cup veteran who plays for Libertad in Paraguay, also is a possibility for that role.

Sunderland is sixth in the English Premier League, one place out of a UEFA Europa Cup berth, with an 8-5-10 record.

CRACKOVIA'S NEW EPISODE IS UP FEATURING: 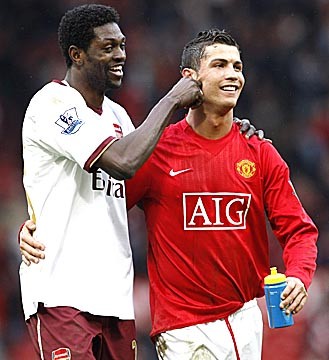 Real Madrid C. F. and Manchester City FC have reached a deal that will see Emmanuel Adebayor play on loan for the former club. The player will remain at Real Madrid until the end of the current season, at which point the Club hold a unilateral option to purchase the player.

The Sky Sports touchline reporter who was caught on camera making sexist comments about a female assistant referee ahead of Saturday's match between Wolves and Liverpool has also been hauled off air by the broadcaster.

"He [a Sky Sports crew member] says she [Massey] is all right," Burton continued, "now I don't know if I should trust his judgement on that?"

Gray then said: "No, I wouldn't. I definitely wouldn't ... I can see her from here," before swearing and adding: "What do women know about the offside rule?"

The reporter had previously been at the centre of unwelcome headlines for Sky Sports in 2007, when he was given a two-year conditional discharge and ordered to pay £250 compensation following a pub fight with the DJ Richard Bacon.

Betfair, the online betting exchange endorsed by Gray, said today it condemned the former player's behaviour but would not be dropping him from its advertising for now.

"Betfair doesn't tolerate sexism, and we expect others who represent our brand to share similar values," said a spokesman. "We've expressed our disappointment to Andy Gray's representatives about the comments that have been reported in the media over the last 48 hours. At present we have no plans to change the way we work with Andy." (LOL OKIE DOKIE THEN)

I think this is to do with something else though. Kay Burley just reported breaking news that Andy Gray has been sacked, but Sky News's website has crashed so there's no source... Sky News' website is working now. And the reason for his sacking on The Guardian's website.

For now, make do with Sky News's Twitter as the source: http://twitter.com/skynewsbreak

BRAZILIAN PRO REFEREE SPEAKS
ABOUT HIS DOUBLE LIFE AS A WOMAN

Brazilian referee Valerio Fernandes Gama, 32, who works in the Ceará Championship first division, in the North-East of Brazil, admitted that at night, he lives a second life as a woman.
“My female name is Laleska, only at night, when I go out to party in my hometown, Beberibe – in the state of Ceará – " declared Fernandes Gama to internet newspaper “Folha de Sao Paulo”. Fernandes Gama also denied ever having been discriminated for being a homosexual. "Of all the referees in Ceará, I’m the only one who’s gay. And nobody ever bothered me about it. They respect me as if I were a woman. In the world od football, and as far as I’m concerned, I have never encountered discrimination or prejudice.