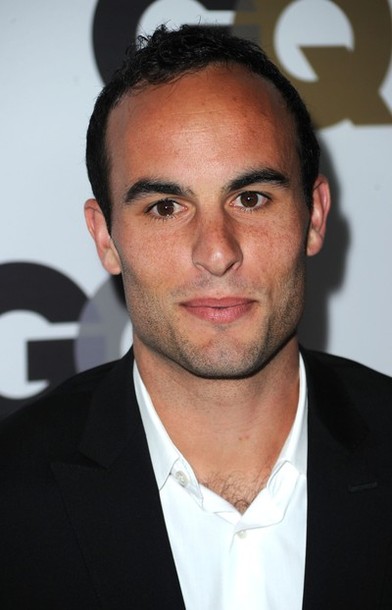 According to the court papers, Landon and the 33-year-old Rules of Engagement actress, separated in 2009 after three years of marriage.

Landon, who plays for the L.A. Galaxy and scored several goals in the 2010 World Cup, is seeking spousal support from Bianca.

Over the summer, the couple attended the ESPY Awards together.


what do we think of this situ? It's not often that a footballer is the one seeking money from their spouse. I would have thought he would have had more money due to endorsements etc  Provided its true, obviously.

Dutch player Ibrahim Afellay, who arrived on Thursday in Barcelona to close his deal with Barça, has said he is delighted but a little nervous to be here at what he considers the club in the world.

When first half of the season ends, the rumour mill starts. Or in the case of Neuer, continues. Here are some selected news stories...

on a side note, mainly for the Schalke girls. According to my latest update Ivan's deadline for renewing his contract ends tomorrow. I haven't heard anything apart from a very unimportant 5 sentence piece about him being flattered by Atletico Madrid's interest in him. Any news about our Croatian wondertboy? I need
him to stay nearly as much as Manu...

ETA: I forgot to thanks Schalke_UK twitter, which where I got all these stories from. And thank you for linking to this post as well!

~*contest and poll*~
okay so since its about midway in the leagues, i think its about time for a consensus about who would win. i included only the major european leagues, desole. the options are of the top five teams at the moment. i included an other option for those who think another team will win. lets be like paul the octopus.

~*prize*~
so at the end of all the leagues, i will come back to this post. i will put the names of who predicted correctly into a hat and draw a winner. the winner will be sent a merch from the winning team (or a team they prefer). (my bank account is healthy enough for this prize)

Who needs Pitchfork when you've got Liverpool's number 19?
( Collapse )

Former Aston Villa and Everton striker Andy Grey has said that the star of Barcelona, Lionel Messi is not good enough to play in the Premier League and he would struggle more than often.

Andy Grey was discussing the candidates of Ballon D’or on Monday evening when he was broadcasting the match of Everton against Manchester City and when asked if Messi would be able to score so easily like he does in Barcelona if he was in a team of the Premier League he said: "The Argentine would struggle in a cold night at the Britiannia Stadium."

And also slamming at La Liga by stating that the Spanish league does not have the same depth of quality as the English one, and Messi only being able to score so easily because of the lack of quality.

Andy Gray has caused quite a move around the world by stating those words and everybody is talking about it in corners of all over the planet. And just before ending his criticism he said that Cristiano Ronaldo wouldn’t be in the place he is today if it wasn’t for the English Football.

Those of you in the UK may me familiar with The Jeremy Kyle show, usually the kind of show were 90% of the countries chav population choose to go to get lie detector results, talk about their family issues and generally get on TV for the most embarrassing things.

But today the show was granting Christmas wishes, and one little boy got to go to Anfield and meet some of the players..


Michel Platini will be re-elected unopposed for another four years as Uefa president in March, after no other candidate put their name forward before last night's midnight deadline.

Uefa said in a statement: "As of today, 23 December 2010, only one candidate has been announced: current Uefa president Michel Platini will be seeking a second four-year term of office from 2011 to 2015."